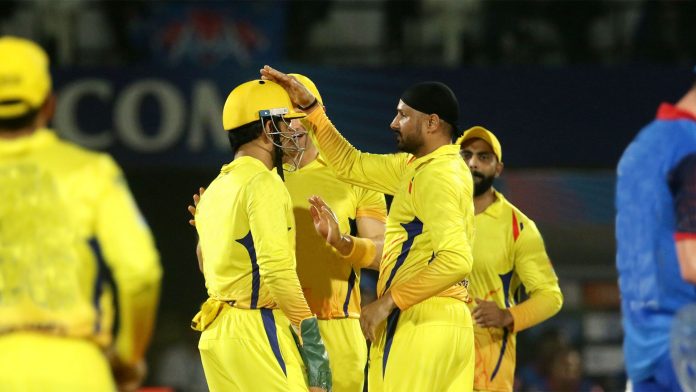 In a do or die match, Chennai Super Kings’ skipper, MS Dhoni won the toss and elected to bowl first. The decision turned out to be right as Dwayne Bravo, Harbhajan Singh, Ravindra Jadeja and Imran Tahir bowled brilliantly and confined Delhi Capitals to 147 runs. Delhi Capitals didn’t get off to a good start as they lost three wickets at the score of 57 runs. After this, Delhi Capitals were in need of a partnership, but due to tight bowling by (the) Chennai bowlers and pressure to score fast sent Delhi skipper, Shreyas Iyer back to pavilion.

Axar Patel and Sherfane Rutherford‘s stay at the pitch didn’t lasted long. At the end of the innings, Rishabh Pant played a handy knock and was looking to end the innings in style, but pacer Deepak Chahar dismissed him in the Penultimate over of the innings. Delhi‘s lower order batsmen managed to get 16 runs in the final over of the innings.

Needing 148 runs to win, Chennai didn’t get off to a flying start and in the initial 4 overs of the innings, Shane Watson and Faf du Plessis scored only 16 runs. In the final two powerplay overs, Chennai took 26 runs as a result of which the required run rate didn’t go high.

South African skipper, Faf du Plessis jagged his 50 in 37 balls while former Australian batsman, Shane Watson provided him good support from the other end. In the 11th over of the innings, Trent Boult broke the opening partnership and dismissed Faf du Plessis. After this, Shane Watson opened his shoulder and smacked two sixes in the 12th over of the innings and bought up his half-century in 37 balls. At the end, Chennai sealed their place to finals quiet easily with one over left. This will be Chennai Super Kings 8th IPL final appearance.

Now Mumbai Indians and Chennai Super Kings will clash in the final on 12th May 2019 to win their fourth IPL trophy.

Follow MyTeam11 for more updates and information about the latest Sportsstuff.