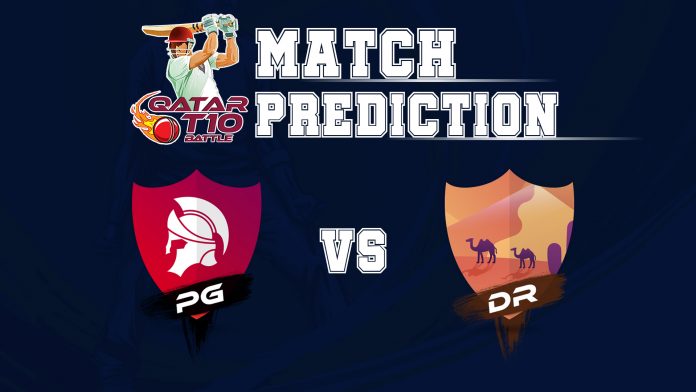 After a disappointing start to their campaign in the opening fixture of the Qatar T10 Battle, Pearl Gladiators would hope to get things rolling in the tournament as they face off Desert Riders in the 6th match of Qatar T10 Battle. The game will commence at West End Park International Cricket Stadium, Doha. The match is scheduled to start at 9:00 PM IST (6:30 PM local time). Unlike their opponent, Desert Riders campaign is off to a flying start as the team managed to win both of their games.

Mohammad Hafeez has been in fine form for the Riders. The former Pakistan opener played a match winning inning for the Desert Riders in the chase against Flying Oryx. His explosive knock of 45 from 23 balls guided Riders to a 7-wicket win. Hafeez has been brilliant with the ball as well. The all-rounder has racked up 3 wickets in two matches so far with an economy of under 7. Rider’s local player Muhammad Tanveer has also contributing well in the last two matches. They will be hot favourites against the Gladiators.

An extremely poor batting performance by the Pear Gladiators cost them their first match. Unavailability of foreign players weakened their batting line up and that was visible in the previous match. Faisal Javed did score some runs at the top of the order but it wasn’t enough. The other players such as Sohaib Maqsood and Mehran Khan will need to come up with the big hits to boost Gladiators to a match-winning total on Tuesday.

The surface has been on a slower side lately and has not allowed the batsmen to hit freely. A score around 94-100 will be difficult to chase in this deck.

The weather forecast isn’t ideal for this game with scattered thunderstorms expected on Match day. The temperature will be around 21-24 degrees Celsius.