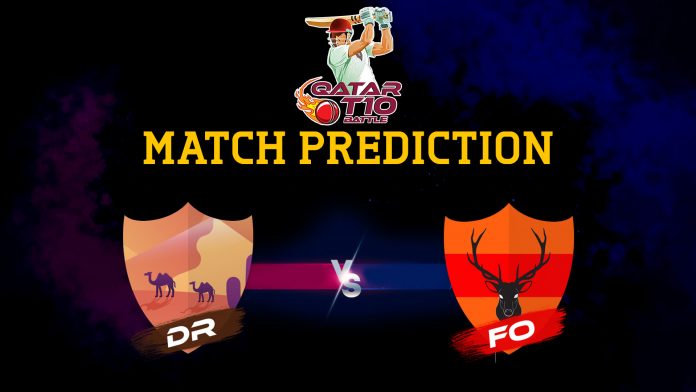 Desert Riders are set to take on Flying Oryx in the fourth match of Qatar T10 Battle at the West End Park International Cricket Stadium in Doha. The game is scheduled to start at 9:00 PM IST. Both the teams started their campaign with a victory, and they will look to continue their winning momentum when they take on each other tonight. Flying Oryx in their first match thumped Pearl Gladiators by nine wickets. Oryx’s skipper Hussain Talat was the star with the bat as he anchored his team to an easy win. Captain Hussain Talat (59 not out) launched a blistering attack on the rival bowlers after an early loss of Valeed Veetil (4). He blasted three sixes and eight boundaries in his unbeaten 59, facing just 29 balls.

Desert Riders, on the other hand, handed seven-wicket defeat to Swift Gallopers yesterday. Local star Mohamed Tanvir’s fiery knock of 49 helped the Riders to clinch victory with seven balls to spare. Tanvir smashed 49 not out off just 21 balls. He was well supported by Adnan Mirza who made 23 in 13 balls with five hits to the rope.

The pitch is expected to be hard and dry. The ball will come on to the bat nicely. Score around 90-110 will be a very challenging target on this pitch.

We can expect a partly cloudy and breezy weather tonight. Late-night showers are expected as the reports suggest 78% chances of rain. The temperature is expected to be somewhere around 21-23 degrees Celsius.