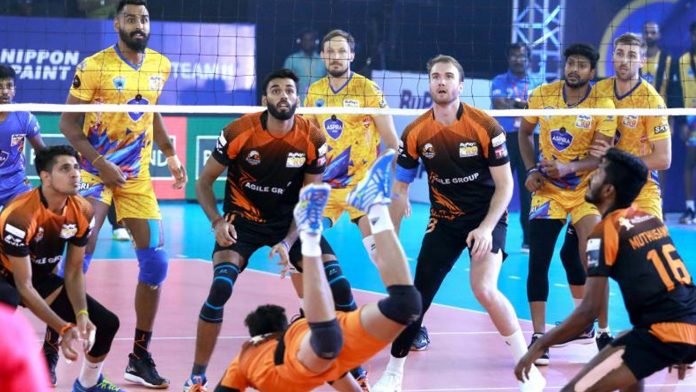 The inaugural season of Pro Volleyball League is going in full swing with the matches touching another level of excitement and thrill. Well, as the series progresses, we get to lay our hands on crisp victory & sad defeats.

One such enthralling face-off was between Chennai Spartans and Black Hawks Hyderabad which gave a memorable victory incident. The game played on Thursday saw Chennai Spartans recording their first-ever victory of the season. It was during the sixth match of the Pro Volleyball League 2019 which was played at the Rajiv Gandhi Indoor Stadium in Kochi, Kerala when the Black Hawks tasted a terrific 4-1 defeat.

The game started in favor of Black Hawks Hyderabad who started off well, with Carson Clark helping the team to attain a quick lead of 5-0 points. The Chennai Spartans were nowhere behind in the game and managed to pull off quite a few points; however, Hyderabad kept its game strong maintaining a lead of before the mid-set technical timeout.

However, Hyderabad’s lead turned out to be of no use as Chennai Spartans went on to clinch the victory at the end of the game. Naveen Raja Jacob, the prominent player of Chennai Spartans, became the highest scoring player for the match, with a total of 16 points. Other important players from the match were Ruslans Sorokins and Rudy Verhoeff scoring 13 and 10 points, respectively.

Talking about the advancements, the 7th match of the Pro Volleyball will be played between Kochi Blue Spikers and Black Hawks Hyderabad at the Rajiv Gandhi Indoor Stadium.

Share
Facebook
Twitter
Previous articleSquad Update: Aussies announce 16-man squad for T20 & ODIs ahead of their India tour
Next articleIPL 2019 : 3 OVERSEAS PLAYERS TO LOOK OUT FOR