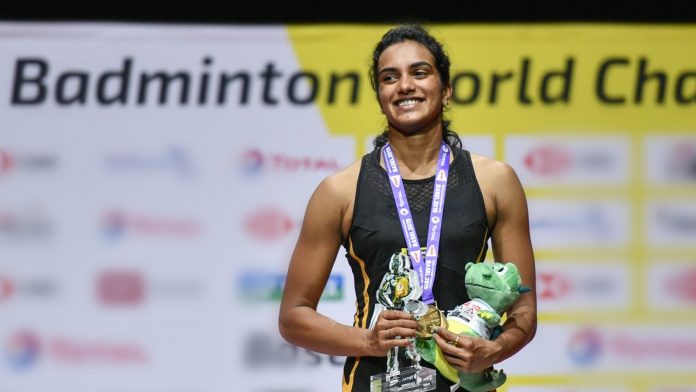 Tried once – Failed. Tried twice – Failed again. Tried thrice – succeeded. Those couple of words define Badminton star PV Sindhu, who defeated Okuhara 21-7, 21-7 to create history. Upstaging Okuhara, Sindhu became the first Indian to win gold at BWF Badminton Championship. PV Sindhu had experienced tremendous heartbreak in the 2017 and 2018 editions of the World Badminton Championship. Her loss to Nozomi Okuhara in the final in 2017 had raised questions on whether she could ever win the gold medal on the grand stage. However, playing some inspired badminton, Sindhu overcame all the years of pain to finally become third time lucky and win gold in the World Badminton Championship in Basel on Sunday.

Displaying her improved fitness level and playing short, quick points, Sindhu had Okuhara completely on the backfoot as she stormed through the first game in just 16 minutes. Sindhu won eight consecutive points twice and her aggressive streak opened up a 16-2 lead in the first game. Although Okuhara tried to bounce back by winning some points, the deficit was too much and Sindhu clinched the first game 21-7.

Clearly rattled by the aggression shown by the Indian shuttler in the first game, Okuhara tried to stay in the match in the second game but Sindhu once again rattled off six consecutive points to open up an 8-2 lead in the second game. The speed, agility and intensity shown by Sindhu displayed a different side of her badminton and the Japanese shuttler simply had no answers. After 37 minutes, the game ended and Sindhu had finally overcome the pain of 2017 and 2018 on the grand stage.

Sindhu entered the final for the third consecutive time with a 21-7 21-14 win over World No. 3 Chen of China in the semifinals. Sindhu had started the match on an aggressive note won six consecutive points as she raced away to an 8-2 lead. Chen Yu Fei tried to get in the game but Sindhu was in her elements as she continued to play solid badminton. The Indian shuttler extended her lead and maintained her serve consistently as she won the first game 21-7 in just 19 minutes.

In the second game, Chen Yu Fei increased her intensity and kept in close touch but Sindhu held her nerve at crucial intervals as she took a 10-6 lead. Chen tried to bounce back and be aggressive but Sindhu calmly held on to her lead and did not yield an inch to the Chinese as the Indian put up a brilliant display of domination.

Sindhu maintained the lead and ensured Okuhara did not even have an opening as she led 16-4 and was on the cusp of history. Okuhara simply wilted under the onslaught and Sindhu pushed on towards a dominant win. Sindhu had lost to Nozomi Okuhara of Japan and Carolina Marin of Spain respectively in the summit clash of the last two editions of World Championship held in 2017 and 2018.