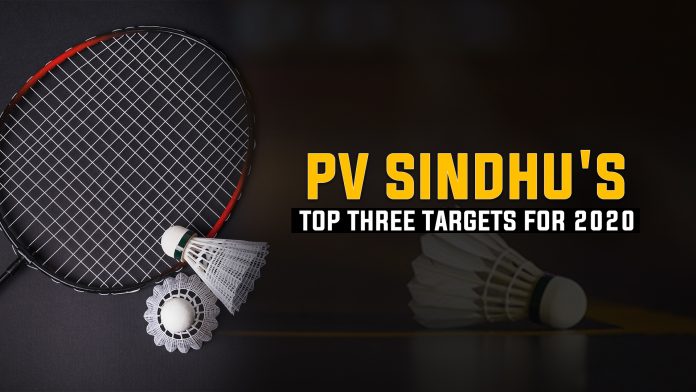 The year 2019 has been a roll coaster ride for ace Hyderabad-born shuttler P V Sindhu as she made early exits form a series of tournaments. The only title she managed to win last year was India's first ever World Championships gold in Switzerland. She failed to defend the World Tour Finals title last month and struggled to even go past the first couple of rounds in the Super Series events.

Due to her constant disappointing performance, the badminton sensation has invited criticism from the experts. Keeping the high expectations of her fans in mind, Sindhu has set her top three targets for 2020. As she welcomed the new year, she has expressed her desire to win gold medal for Tokyo Olympics and is determined to add her second Olympic medal to her trophy cabinet.

Keeping Tokyo 2020 as her priority, Sindhu shed light on her mission 2020, “Winning the Olympic gold will be the first and most important target. Then to become No.1 in the world and win a few of the super series titles”.

She has also kept an eye on clinching the prestigious title – All England Championships – but Olympic is the most important tournament for her.

Talking about her ambitions this year, the 24-year-old also mentioned that she is currently undergoing preparation to iron out the flaws for her ultimate aim. She asserted, “We are doing a lot of work on technique and skill workouts and everything will be planned and it will go well in the Olympic season”.

Sindhu cemented her confidence by stating, “Despite first round defeats, the belief that I will play well in the next tournament is very strong. The World championships is a very happy moment”.

“Unpredictability is my strength. I feel it is a good thing. It depends on the day, the shuttle, surroundings, drift etc. But I never felt bad about my early round losses”, she concluded.