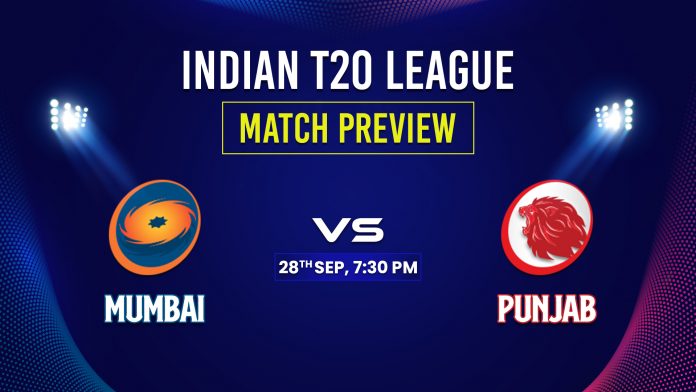 Punjab and Mumbai are scheduled to play against each other on 28th September in the 41st match of Indian T20 League. Mumbai & Punjab both will play to win in order to reach the top four on the points table and make it to the playoffs. The last year's champions are struggling this year to stay in the top four. Due to their low net run rate, they've come down to the 7th position in the points table.

On the other hand, Punjab is sitting at the 5th position, close to making into the top 4 but are not yet there. The team has been very inconsistent with its game, they did not win consistently, neither are the players consistent with their game. The team must win the coming match to make it to the playoffs. Both the teams need to win this match, it would be fun game to watch as both the teams are vulnerable and would want to win by hook or by crook.

Rohit Sharma is the captain and the strategist on which the Mumbai team depends. He is a dependable batsman as well, who manages to get runs in every match he plays. His previous match injury can also be called a reason for the downfall of the team. In the coming matches, he'll be the player the team looks up to. In their bowling attack, Trent Boult is the low economy and wicket taking bowler. He is the bowler that confuses his rival with his changing bowling techniques and gets the wickets without giving many runs.

Talking about Punjab, KL Rahul is the most successful batsman, and the only consistent player for his team. He manages to score the highest runs for his team and stays on the field for long. He is a batsman with class and has a record of scoring highest runs in one of the seasons of the Indian T20 league. Mayank Agarwal is another reason why the Punjab team has a strong batting side. He managed to score well in the first match in UAE and he is hoped to keep up his performance.

The pitch of Sheikh Zayed Stadium is a slow one. The pitch favors batsmen more as it makes it hard for bowlers to use a variety of bowling techniques. The teams can make huge scores here. The seamers and swing bowlers are at a disadvantage at the stadium. The only bowlers that the pitch favors are the spinners. So, in the game, the spinners and hard-hitting batsmen will be the key to victory.