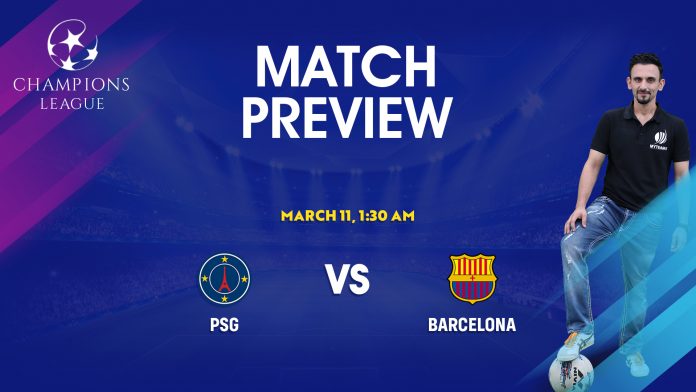 Barcelona will make travel to Par Des Prices to overturn a 4-1 deficit from the first leg of the round-of-16 tie in Champions League 2020-21. PSG almost secured their place in the quarterfinals after the last trip to Spain.

Last night Porto knocked out Ronaldo’s Juventus and tonight, we can see Messi on the same bench. Two big starts will not be seen in action later in the Champions League. Barcelona has made their task too difficult and they have to play extra-ordinary football to outclass PSG in away fixture. Messi started the scoring with an early strike but Kylian Mbappe's hat-trick and Moise Kean's goal assured PSG a vital 4-1 victory against the La Liga side. Mbappe became just the third player of all time to score a Champions League hat-trick against Barcelona.

Barcelona are coming off a 2-0 victory against Osasuna in La Liga and they recently defeated Sevilla in the second leg semifinal 3-0 to book the place into the final of Copa del Rey. After the defeat at home in the Champions League, Barca conceded just one goal and scored nine goals. The Spanish side is doing well at the domestic level and they would keen to carry this form in away fixture to deliver something terrific.

Ronald Koeman's side kept themselves in the hunt for the title at La Liga. They are just three points behind Atletico with one extra game. They are in the final of Copa del Rey so one trophy looks possible for them. Barcelona have to defeat PSG with a margin of four goals which looks slightly impossible considering the current form of PSG at home.

Meanwhile, the French giants are highly boosted after the away success against Barcelona and they are so close to the quarterfinal spot. Pochettino's side made it into the next round of the Coupe de France courtesy of a 3-0 victory over Brest and they recently defeated Bordeaux in Ligue 1 to boost their chances for the title. They are just two points behind Lille after 28 matches and with a better goal difference, they can look for another top-flight trophy. PSG lost last time at the home ground when they faced title rivals Monaco in Ligue 1. French champions had won six league games before this loss and if they lose, they can face back-to-back losses at home for the first time since May 2009.

PSG will be confident for this match after the comeback of Di Maria. With this attacking player, the French outfit can secure the spot in the quarterfinals. PSG will be without the services of Neymar, Moise Kean, and Juan Bernat. Keylor Navas, Presnel Kimpembe, Marquinhos, and Layvin Kurzawa will be back in the main lineups. Di Maria, Marco Verratti, Mbappe, and Mauro Icardi are expected to start for PSG.