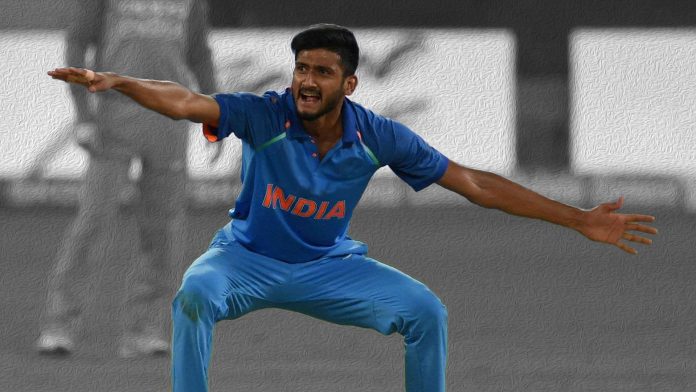 Rohit Sharma’s 162 runs, Ambati Rayadu’s century, Dhoni stumping Paul in just 0.08 seconds and India defeating West Indies by a difference of 224 runs, all this happened in a single game. The 4th ODI of Windies tour of India turned out to be a game full-off excitement, records, and glory for team India. But, one thing which was not anticipated by the team was Khaleel Ahmed landing up in a troublesome situation post the game.

Amid the 4th match of the series, Indian fast bowler, Khaleel Ahmed was officially given a warning by Chris Broad, the International Cricket Council match referee for showcasing a provocative gesture on the field.

The act was witnessed during the 14th over of the game wherein Khaleel Ahmad is seen making an aggressive gesture towards West Indies player, Marlon Samuels who was dismissed at that very moment by the young Indian fast bowler. Ahmed went all gaga after howling an important wicket and out of excitement made an aggressive gesture towards the player which was enough to land him in trouble. The move made by Khaleel to celebrate his triumph was looked upon as a provocative move by the on-field umpires Ian Gould and Anil Chaudhary.

Talking about Ahmed’s views on the incident, the player accepted to the offense and deliberately accepted the official warning and the awarding of 1 demerit point by the authorities, thus, leading to no official hearing regarding the case.

By winning the Monday’s game, India is now leading the game by 2-1 and looks upon the upcoming final game of the 5-ODI-matches, scheduled to be held on Thursday. We will see whether team India bags the Winner title in the final game too, till then stay tuned for more cricket stories