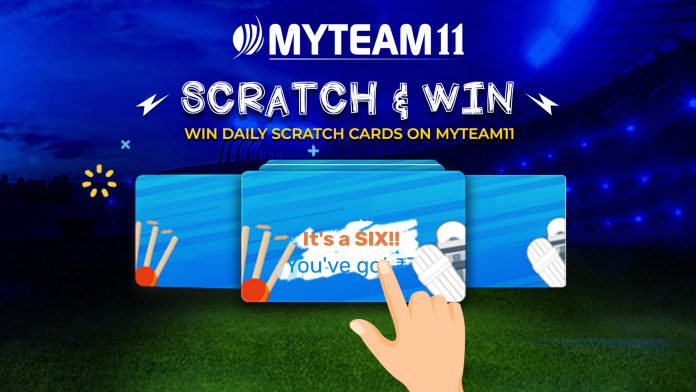 MyTeam11, the fantasy sports giant is working towards making the platform more and more user-oriented. On their mission to accomplish the same, the creators and the team are on a spree of launching new features that are taking catching the users by their eyeballs.

One such feature that created a hype amongst the 10 million+ users of MyTeam11 is the “Daily Bonus.” The “Daily Bonus” feature lets you earn rewards on a daily basis through a daily scratch card. The daily scratch card is offered to the users when they open MyTeam11 for the first time in a day. Moreover, the rewards earned are added to the users’ wallet and can be used to join various contests on MyTeam11.

The feature that has been doing the rounds since it was launched was introduced by the platform in order to reward its user base for their loyalty towards the brand alongside the aim of becoming a stand out platform with uncommon features.

Though the feature comes with a set of Terms and Conditions associated, it is one of the best features ever introduced by a fantasy platform. It will surely drive the user base of the organization a notch higher.

Prior to this MyTeam11 launched its application in 9 different languages including Hindi, English and 7 other regional languages, to become the only fantasy platform with a multi-lingual interface. Also, it collaborated with over 20 channels for TV ad campaigns ahead of the IPL 2019.

“We are one of the leading names in the fantasy sports market and to ensure that we are serving our user base with the best we can, we keep on digging new techniques and features. In this competitive era, we try and introduce something out of the box that can interest our users. Daily Bonus is one such feature that we believe will surely catch the attention of the users intriguing curiosity among them,” Sanjit Sihag, COO MyTeam11, was quoted saying while explaining about the latest feature.

MyTeam11 is active in the market since the year 2016 and has left no stones unturned when it came to introducing innovative marketing techniques, building brand image, and meeting user demand. The platform currently offers four primary fantasy games including fantasy cricket, fantasy football, fantasy kabaddi, and fantasy volleyball. The platform with Virender Sehwag as their brand ambassador became the first ever to introduce fantasy volleyball.