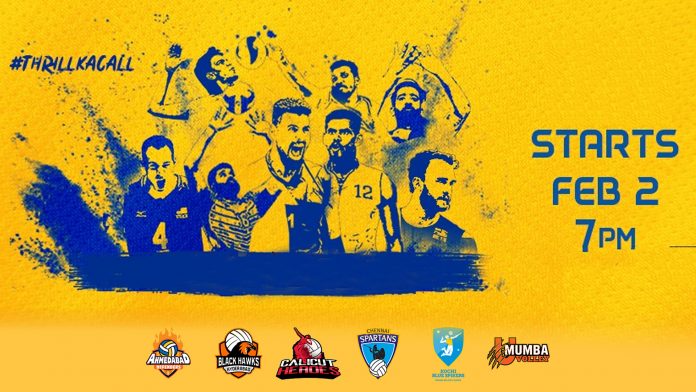 The 6 different franchises will be representing different cities of India. The cities that will be participating in the inaugural season of the Pro Volleyball League are Ahmedabad as ‘Ahmedabad Defenders,’ Calicut as ‘Calicut Heroes,’ Chennai as ‘Chennai Spartans,’ Hyderabad as ‘Black Hawks Hyderabad,’ Kochi as ‘Kochi Blue Spikers,’ and Mumbai as ‘U Mumba Volley.’

Pro Volleyball league: How to Play

All the teams will play each other once in a round robin format first followed by knockouts;

The scoring system to be followed in the league will be as follows:

If two teams are still tied, there will be a toss of a coin.

To Score A Point

1. Each Match during the league phase shall comprise of 5 sets of 15 points each and the teams must play all 5 sets;

3. A service ace will be called a “SUPER SERVE” and will carry two points. An ace is classified as a serve which lands in the oppositions half and is not touched by any player. It may be noted that if the team with the service has taken a “SUPER POINT” and it turns out to be a “SUPER SERVE” the points awarded will be 2 only, this applies in the vice-versa situation as well and the “SUPER POINT” taken will not be considered or counted.