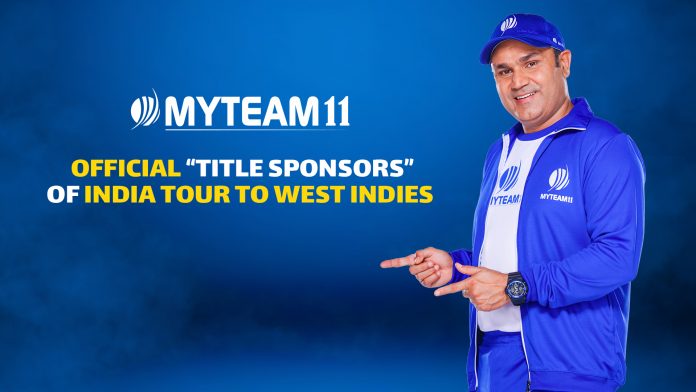 MyTeam11, the leading name in the world of fantasy games recently announced its tie-up with ruling body for cricket in West Indies, ‘Cricket West Indies,’ as the Title Sponsors for the upcoming India Tour to West Indies.

Cricket West Indies is delighted to welcome “MyTeam11’’ as the title sponsor of the forthcoming “MyTeam11 International Series” between the West Indies and India. We know that sports fans and cricket fans, in particular, are exploring additional ways to grow their engagement with the sport they love. MyTeam11’s sponsorship gives fans a new means to get involved with all of the action throughout India’s tour of the West Indies. The Series will be full of excitement across all three formats of the game pitting the world’s most followed team, India against every cricket fans’ second favorite team and the heartbeat of the Caribbean, the West Indies. This partnership demonstrates the appeal of the West Indies cricket brand far beyond Caribbean shores,’ mentioned Dominic Warne, Commercial and Marketing Director, Cricket West Indies.

This is the first time ever in the history that a fantasy sports organization acquires Title Sponsorship rights for a cricket series, and the achievement is definitely remarkable. The tournament is scheduled to begin sometime in August owing to BCCI’s request of shifting the dates, and will end at around 4th September. The tour will comprise of 3 T20s, 3 ODIs, and 2 Test matches.

Vinit Godara, CEO MyTeam11 commenting on the association, “MyTeam11 is not only one of the largest fantasy sports platform and our dream project but is more of a mode for users to achieve their dreams. The growing relationship between our users and the platform motivates us always to offer them something new and indispensable. After, multiple modes and multiple languages, we have another good news for our users, in terms of Title Sponsorship of India vs. West Indies series. We believe that this collaboration will not just help us reach new milestones and uncover new potentials for the platform but will also make MyTeam11 a bigger Brand Name.”

Further, discussing the partnership, Sanjit Sihag, COO MyTeam11, mentioned, “We always strive to be the first when it comes to the introduction of something innovative or unique. Through this tie-u, MyTeam11 will become the first ever fantasy sports platform to become the Title Sponsors of a series, and targeting an international series in the first go will surely add another feather to MyTeam11’s cap of success.”

MyTeam11 is the second largest and fastest growing fantasy sports platform in India, offering cricket, kabaddi, football, and volleyball. There had been quite a few announcements about the sky-rocketing growth of MyTeam11 which included a partnership with Pro Volleyball League & the launch of fantasy volleyball, partnership with Bangladesh Premier League, launching the platform in 9 languages and TVC partnership with more than 20 channels. Also, the fantasy giant reached to a total of 15 million+ user base after the recently concluded IPL 2019.