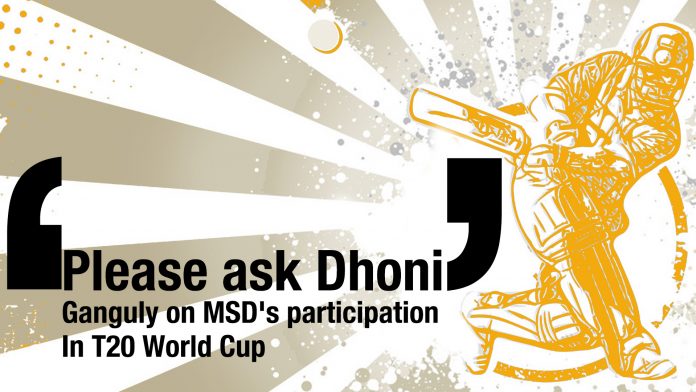 "Please ask Dhoni," was Ganguly’s stern reply on Sunday when a reporter asked about the possibility of Dhoni featuring in the T-20 World Cup 2020. Dhoni himself said in an event that he won’t entertain media regarding his retirement till January. Dhoni, who is on sabbatical since July, will miss the home series against West Indies starting from 6th December.

BCCI members met at its headquarters in Mumbai on Sunday for the 88th Annual General Meeting (AGM) of the board and several amendments were proposed in the constitution. While the changes put forth will be sent to the Supreme Court for approval, it was decided that Secretary Jay Shah will represent the board in the ICC CEC (Chief Executive Committee) meetings.

In the AGM, several other key decisions including the removal of the tenure cap on office-bearers were also taken. However, BCCI members decided to sought legal opinion first and they have approached the Supreme Court for the same.

BCCI president Sourav Ganguly on Sunday also talked about the issues regarding CAC formation. Ganguly admitted that clause 38 in the BCCI constitution is the reason that BCCI has been unable to appoint the Cricket Advisory Committee (CAC).

“It has to be practical. Conflict should only be for someone like us, who are administrators,” the former India captain further said.

Sourav also said that formation of full time CAC will be of no use as the CAC will have no role to play over the next two years except for the appointment of selectors.

“CAC does not have much work. We keep talking about CAC. Its work is the appointment of the selection committee and coach. Once you appoint selection committee, it stays for four years and the coach remains for three years," Ganguly said to the press.

However, Ganguly didn’t completely deny that CAC will not be formed.

“We will form CAC and we met Justice D. K. Jain. Me and V. V. S. were cleared; we need to get proper clarity on what is conflict and what is not,” Ganguly told the reporters.

Ganguly also said that the board is considering to propose an IPL Hall of Fame for cricketers who have delivered exceptional performance in the T20 league. Former Indian Captain also hinted at a possibility for IPL teams to play outside India. However, the royalty fee for playing abroad has to be discussed with BCCI.

Ganguly also mentioned that he is planning to share BCCI's ever-increasing revenue with all stakeholders.

"As you know the revenue of BCCI is increasing and will increase. The money has gone up so what we are doing is incentivising states to build better infrastructure. Gujarat has build such a huge stadium, Himachal has such fantastic facilities, Chennai's new stands are back on track.