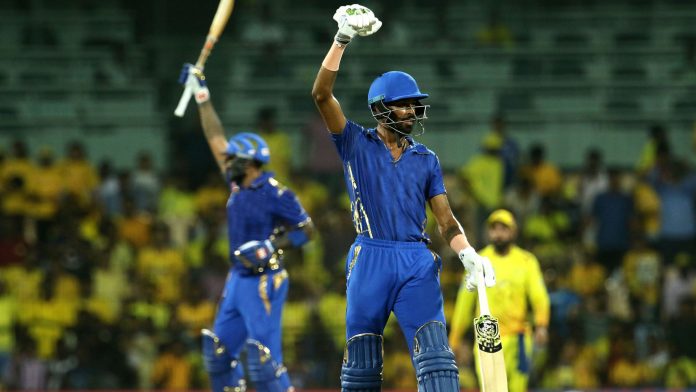 Before the commencement of the match, Chennai Super Kings skipper, MS Dhoni won the toss and elected to bat first. But, the decision to bat first backfired as Chennai lost Shane Watson, Faf du Plessis, and Suresh Raina within powerplay overs. After this destruction, Murali Vijay, who was included in the squad in place of injured Kedar Jadhav, added 31 runs with Ambati Rayudu before Rahul Chahar sent Murali Vijay back in the 13th over of the innings. It was then the turn for captain cool to make way towards the crease and join Ambati Rayudu. Despite some nervous moments in the middle overs, Chennai batsmen managed to hit 2 sixes in the 14th over of the innings. However, Mumbai bowlers did not allow CSK to express their potential. Despite this Dhoni managed to hit two sixes in the 19th over of the innings against Lasith Malinga. Finally, in the end, Chennai reached 131 runs, thanks to MS Dhoni‘s unbeaten 37.

Needing 132 runs to win, Mumbai Indians lost skipper, Rohit Sharma in the very first over of the innings. After this, veteran spinner Harbhajan Singh gave CSK second breakthrough in the form of Quinton de Kock, who tried to hit a six, but was unfortunately caught by his national teammate, Faf du Plessis in the deep. At this stage, the match was equally balanced. After this Suryakumar Yadav and Ishan Kisan, good partnership for the fourth wicket turned the game in Mumbai’s favor. In the 14th over of the innings South Africa leg spinner, Imran Tahir dismissed Ishan Kisan which once again could have given Chennai a ray of hope. But at the end, with the help of Suryakumar Yadav’s unbeaten 71, Mumbai became the first finalist of this season.

Suryakumar Yadav was named ‘Player of the match’ for his brilliant 71 runs knock.