Players who made their debut due to injury of other player 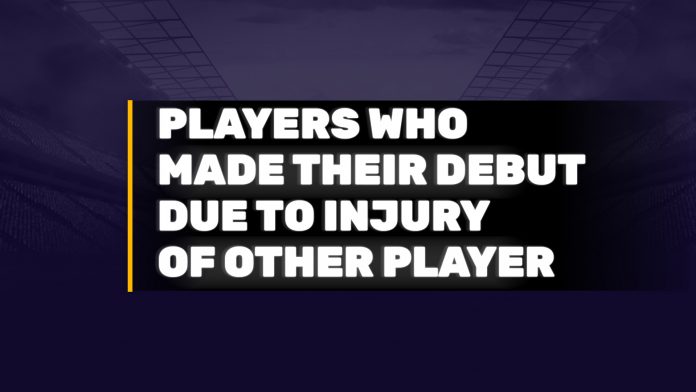 Injuries have always been part and parcel of the game. However, if they come at a time when the team needs you the most, it may even cost you your career or get someone else to replace you. Yes, these injuries may prove to be a blessing in disguise to other players, who are waiting for their chances.

There have been instances of players being called up at the last minute to fill up a spot for an injured player. Alastair Cook made his Test debut in 2006 for England replacing Michael Vaughan, who was suffering from a knee injury.

With this, MyTeam11 brings to you three such players who made their debut due to injury of other players:

The eternal baby-faced cricketer from Gujarat, Parthiv Patel was fortunate to make his Test debut in 2002. India had found a reliable keeper in Ajay Ratra up to that point as Nayan Mongia’s career got over in 2001. Ratra had shown some good skills with the bat becoming the second wicketkeeper to score a century for India in Tests outside the country when he scored 115 against West Indies in Antigua.

However, he got injured despite being selected for the England tour in 2002 and a 17-year-old Parthiv Patel was chosen in his place and eclipsed the previous record of being the youngest wicketkeeper, previously held by Pakistan's Hanif Mohammed (17 years and 300 days). Patel continued to be the no.1 keeper in the Tests and even in ODIs for some time, even opening the batting against a rampaging Shoaib Akhtar in 2004.

But poor wicketkeeping and inconsistent batting displays saw him getting dropped from the team in 2004 for Dinesh Karthik and then the rise of MS Dhoni meant no other keeper ever stepped into the dressing room for the next decade or so. He did make a short comeback into the team for South Africa series in 2018 and was chosen for England series thereafter, but again, an injury forced him out of contention and Saha and Pant have pushed him down the pecking order.

Wriddhiman Saha has been the world’s best wicketkeeper for quite some time now and has provided valuable runs with the bat as well. However, he also played under the shadow of MS Dhoni and was his understudy for quite some time before becoming the first choice keeper after his retirement in 2014.

It took Rohit another 3 years to make his Test debut

One of the most phenomenal spinners in Indian domestic cricket, Jharkhand’s Shahbaz Nadeem toiled hard after making his FC debut in 2004. He has 424 wickets in 110 FC matches and 145 wickets in 106 List-A matches.

He did consistently well for India A teams, but the presence of Ashwin and Jadeja in home Tests and rise of Kuldeep Yadav as the third-choice spinner meant Nadeem was left with nothing but to continue to striving hard, something he did without complaining.

Finally, his day under the limelight came thanks to an unfortunate injury to Kuldeep Yadav on the eve of the third Test against South Africa in Ranchi. Kuldeep complained of pain in shoulder and Nadeem was called up as a backup and on the day of the match, was handed his Test cap, making him the 296th Test cricketer from India.

This is a reward for all the hard work he has put in toiling away in Indian domestic cricket for more than a decade now and he will hope of getting more and more chances as India will play some more Tests at home.