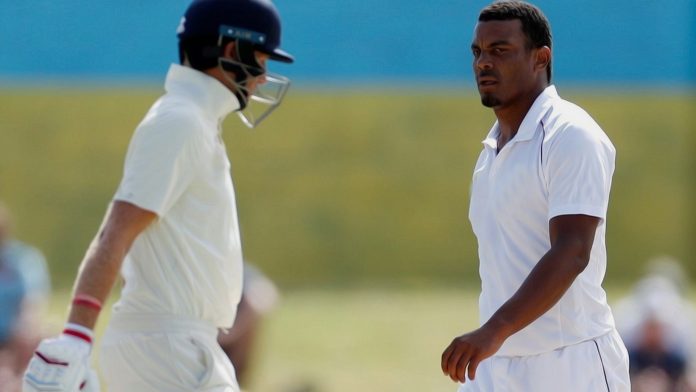 The ruling body for cricket games all over the world, the International Cricket Council (ICC), has handed over a Four ODIs ban to, West Indies fast bowler, Shannon Gabriel. The decision comes after an incident which took place during the third Test between West Indies and England at St. Lucia.

As per the recent announcement by the ICC, Gabriel will not be playing during the first Four ODIs of the upcoming 5-games ODI series between the Caribbean Giants & England. The incident which led to the suspension was caught on the stump mic. As per the announcement Gabriel is found guilty of breaching Article 2.13 of the ICC code of conduct which states, “personal abuse of a Player, Player Support Personnel, Umpire or Match Referee during an international match,” to be a serious affair.

Following the squabble, Gabriel has been banned for the first Four ODIs alongside being fined 75% of his match fees. Also, the incident took the West Indies fast bowler’s accumulated demerit points to eight.

While speaking about the incident, Gabriel quoted, “I think I owe it to them (friends and well-wishers) and to all supporters of West Indies cricket to provide an accurate record of what happened.”

"The exchange occurred during a tense moment on the field. The pressure was on, and England's captain Joe Root was looking at me intensely as I prepared to bowl, which may have been the usual psychological strategy with which all Test cricketers are familiar,” he further added.

He further explained how the spat ignited, stating, "I recognize now that I was attempting to break through my own tension when I said to Joe Root: 'Why are you smiling at me? Do you like boys?'”

"His response, which was picked up by the microphone, was: 'Don't use it as an insult. There's nothing wrong with being gay.' I then responded: 'I have no issues with that, but you should stop smiling at me.'"

In Gabriel’s words, he explained the episode as “opportunity for myself and all athletes to recognize the need for sensitivity and respect in their interactions with all.” Also, he stated that he confronted Root about the incident and was relieved to find out the player has let it go, and there are no hard feeling between the two, following the alteration.

ICC takes such incidents to be a serious breach of its rule and regulations and thus, ends up taking some strict actions against such breaches. Prior to this, Gabriel was suspended from the Mirpur Test in November 2018.

If you want to keep receiving the latest sports stuff, then stay tuned to MyTeam11.