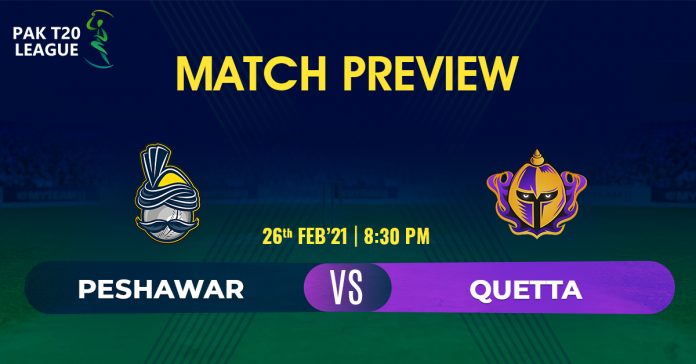 Quetta will take on Peshawar in the Pak T20 League 2021 to find the first victory of the season. Meanwhile, Peshawar would look to add one more victory tonight.

Quetta and Peshawar face each other in the Friday night encounter of Pak T20 League 2021. Quetta’s campaign has been so poor with back-to-back defeats. The Sarfaraz-led side lost to Karachi in the season opener badly when defending champions chased down their target with 37 balls spare. In the second game, Quetta improved their batting and posted a competitive total of 178, but Lahore made a mockery of this target. They lost just one wicket and chased down the target with one ball spare. Two disappointing performances put Quetta at the bottom of the table, and they look slightly dull here. The former winner desperately needs a win here.

Toss is becoming an important factor for this season, and Sarfaraz would aim for a toss–win tonight to find the first victory of the season. Chris Gayle batted very well in the first two games, but he will be unavailable for the entire season due to national duty. It will be a big blow to Quetta. The skipper batted at number four and scored 33-balls 40, but in the absence of Gayle, he may promote himself up in the order. Ben Cutting needs to get more balls if Quetta looks for late acceleration. Azam Khan can also bat in the top-order, and he will be the best option to take the role of Gayle. Qais Ahmed was dropped in the last game, but bowling hasn’t been improved for them.

Meanwhile, Peshawar bounced back in the last game after the defeat against Lahore in the opening game. Peshawar made full use of winning the toss. Multan posted a competitive total of 193 while batting first, and Kamran Akmal and Imam both added 57 runs for the first wicket, followed by a 77-run stand for 2nd wicket. At one stage, the match was in control of Multan when Imam got out, and Peshawar required 60 off 29. Haider Ali thrashed Multan’s bowlers and smashed 24 off just 8 balls to finish the game with one over spare.

Cadmore contributed important 53, but Peshawar has to improve few things. Imam scored 48 off 39 balls, and this is not an ideal knock when the team is chasing almost 200. Peshawar are back on track, but they have to continue the winning rhythm, and Quetta is already down after two losses, so it might be a good game.

Karachi’s surface is good for batting, and it has nothing for bowlers. Pacers can trouble batsmen in the powerplays. Chasing sides will have an advantage.