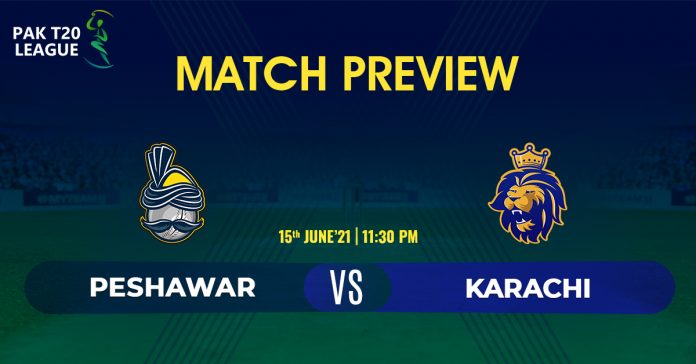 Karachi and Peshawar lock horns in today’s second clash of Pak T20 League 2021. Both sides are sitting in the middle of the table and coming off defeats in previous encounters.

Defending champions had a different campaign this year, and apart from the trend of toss, they failed to draw attention. The consistency is still missing in Karachi’s team. They have played seven matches so far and lost four out of those. The last defeat came while defending 190. They could have grabbed two points from that night, but bowlers let them down at a crucial phase of the game. Babar Azam shined with the bat by scoring 81 off just 54 balls, and Zadran provided a finishing touch with 42-balls 71.

Karachi got two wickets in the powerplay, and it opened the game for them, but in middle-overs, they offered the comeback on the plate. The match was set for Karachi after the powerplay but Munro and Iftikhar made it a cakewalk. Karachi has the best batting unit with some experienced players. Babar Azam is in top-form but other players look inconsistent. Imad has to use his bowlers smartly, considering the toss factor.

Meanwhile, Peshawar was highly boosted after a good start but they are on the same boat. They can find themselves lucky as their captain has won tosses but Abu Dhabi is not similar to Karachi. Sunday night was mixed for them as their batting failed to retain the consistency. Rutherford scored a fine half-century and took Peshawar to 166. The bowling unit was mediocre and Multan did the same what Islamabad did with Karachi last night. The 8-wicket defeat to Multan can now harm Peshawar in the pursuit of playoffs.

Quetta has already been eliminated and the fight for the playoffs is between five teams. Islamabad has also booked its place in the playoffs. Peshawar, Karachi, Multan, and Lahore will fight for the three remaining spots. This game will be a cracker game of cricket and if any side loses here, the route to playoffs will be problematic. Peshawar now have eight points from eight matches, and they are at the middle of the table. One more victory will put them ahead in the race of playoffs. Toss will be a key factor, but a better batting side will have an advantage.

Abu Dhabi’s surface is a batting-friendly wicket, and it gets better later the match progresses. Pacers can get slight help with the new ball. Chasing is still a tough call but we are seeing some good batting in 2nd innings as well.