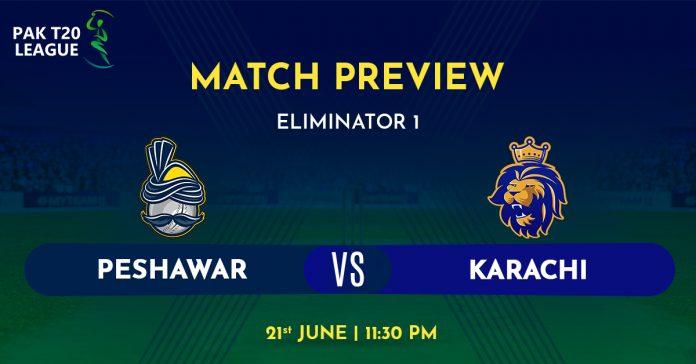 Karachi and Peshawar lock horns in the first eliminator game of Pak T20 League 2021. Karachi knocked out Lahore on a better run rate and qualified for the playoffs.

Defending champions had a different campaign this year but they can be proud of themselves as they somehow managed to seal the playoffs. Danish Aziz scored 45 off just 13 balls, including 5 sixes, and set Karachi's date with Peshawar in the eliminator game. They won five matches out of ten and two wins came in their last two games. Sharjeel Khan finally got runs when he scored 45 against Quetta. Batting was tested by Quetta and Karachi failed to deliver.

Danish’s cameo made a big difference in this knock-out game. Quetta fought hard riding on their skipper but early mistakes hurt them. Karachi has the best batting unit with some experienced players but a collective effort is missing from this side. Their batting revolves around Babar Azam who has aggregated 501 runs in the tournament. Imad is doing impressive things as the skipper but still, he has to use his bowlers smartly, considering the toss factor.

Meanwhile, Peshawar is highly boosted after a good fightback against Islamabad when they came close to chase 248. They also won five matches out of ten but they were slightly better than Karachi in Abu Dhabi. Akmal got a half-century and Malik played a solid knock of 68 off just 36 balls. Peshawar fought hard and showed their best batting version. Bowling might be a concern as they conceded the tournament's highest ever total. Wahab is their main bowler but he is not getting quality support from another end. Riaz has to use Malik more in middle-overs. Toss will definitely play a big role.

Peshawar have played two finals before and won a trophy as well. They have the best combination of experience. Karachi is lacking this approach and Babar’s role will be important for them. Karachi have won three games out of the last five and recently, Peshawar had the laugh. They defeated Karachi after three consecutive defeats. The winner of the side will face the losing side of the qualifier game on Tuesday. It’s another knock-out game for Karachi and they would look to solve this puzzle as well.

Abu Dhabi’s track is a batting-friendly wicket, and it gets better later the match progresses. Pacers can get slight help with the new ball. Chasing is still a tough call but we are seeing some good batting in 2nd innings as well.

Scored 45 in last game, good record in playoffs, 312 runs this season so far

244 runs so far this season, a handy player for Peshawar