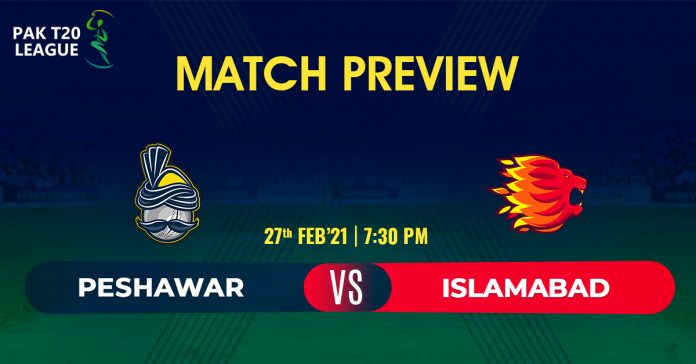 Top two sides of the season, Islamabad and Peshawar lock horns in the second doubleheader clash of the Pak T20 League. Both sides are entering into this fixture with the comfortable chase in the last outings.

After surprising Quetta in a high-scoring chase, Peshawar will play back-to-back games and tonight, they will face confident Islamabad. Peshawar lost to Lahore in its season-opener and added two back-to-back victories. Peshawar scripted two high-scoring chases and take the second spot in the table. Quetta smashed Peshawar hard while batting first and posted a huge 198 in 20-overs. The captain Wahab Riaz conceded 51 runs in his spell. Peshawar lost two wickets in the first 4 overs but one more time, Imam constructed the chase with Haider Ali. Haider Ali scored 29-balls 50 and Peshawar got the acceleration from Malik and Rutherford. Wahab Riaz made a compensation of poor bowling with a cameo of 8-balls 20. In the 19th over, Steyn conceded 21 runs and it helped Peshawar to complete this chase with three balls spare.

It was the second consecutive match when Peshawar chased down a target of more than 190 and on both occasions, the match was slipping from their hands. The collective batting brilliance cannot ignore their poor bowling. Peshawar’s bowling has been so poor and they allowed opponents to score easy runs. Wahab’s captaincy was not up to the mark. Toss and dew are playing an important role and Peshawar is lucky to find themselves on the winning side twice despite mediocre bowling. Saqib Mahmood scalped three in the last game and Mohammed Imran was also handy with conceding just 24.

Meanwhile, Islamabad are the only team that are unbeaten and they won both games comprehensively. In the first game, Gregory’s heroics rescued teh two-times winner from the jaws of the defeat and in the second game, local talent took them home by chasing a huge 197. Karachi posted 196, courtesy of Sharjeel’s ton, and the capital outfit lost two quick wickets in reply. Alex Hales smashed 29 off just one over of Yamin and later, Iftikhar and Hussain Talat guided them home with a match-winning 84 runs stand. Shadab would be happy after seeing middle-order performing after the failure in the opening game. The bowling might be a concern but somehow, they managed to hold Karachi to 196 because at one stage Karachi were 176/0. The skipper tried eight bowlers in the last game and conceded 32 in his 2-overs. Karachi’s pitch is a nightmare but Islamabad couldn’t utilise the momentum when they conceded just 33 in the powerplay. Islamabad would aim for a hattrick of the wins when they play Peshawar tonight.

Karachi’s track is a flat track for batting and it will offer another high-scoring game. The surface is providing high assistance to batsmen in night matches. Win the toss and bowl first is the winning formula on this pitch.