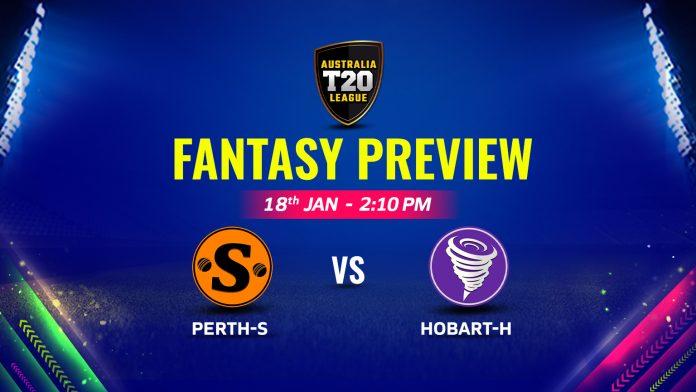 Perth-S take on Hobart-H in the 46th match of the Australia T20 League at the Perth Stadium. The two teams have previously met 18 times, with Hobart-H coming out on top in 7 of those matches, while Perth-S have triumphed 11 times. Let’s dive into the fantasy preview for the match and suggested fantasy XIs.

The Perth-S side, four-time winners of the BBL and reigning champions, continue to demonstrate their dominance in the tournament. They have consistently excelled in all three aspects of the game and currently sit at the top of the league table with 16 points in 11 matches played and have secured their place in the playoffs.

Hobart-H currently sits in the middle of the standings with 5 wins and 5 losses in 10 fixtures. The Hurricanes squad boasts some of the most powerful hitters in the league, including veteran D. Short, captain M. Wade and six-hitting machine T. David, who can dismantle any bowling attack in a matter of overs. The onus falls on pacers Meredith and Dooley to lead the bowling attack and help the team secure a spot in the playoffs.

The match between Perth-S and Hobart-H will be played at the Perth Stadium. The match is scheduled to start at 2:10 PM on 18th January 2023. The lineups will be available at 1:40 PM on MyTeam11.

The Perth Stadium boasts one of the bounciest tracks in Australia, making it a difficult wicket for batsmen. This multi-purpose stadium with a drop-in pitch makes for deadly fast bowling conditions. The outfield is relatively fast, which will favour the batters, while the boundaries are not particularly large. Chasing has proven difficult at this ground, making posting a good target a viable option.

As for the weather conditions in Perth, it is expected to be fairly pleasant with a temperature of 29°C, a relatively low chance of precipitation and a low humidity level of 29%. The wind is also not expected to be too strong, with speeds of around 21 km/h forecast. Overall, it should be a good day for cricket in Perth.

J Inglis (Perth-S): The Australian wicket-keeper is the leading run-scorer for the Scorchers this season. Inglis has scored 313 runs in 10 innings, at a strike rate of 150. He has already scored 3 half-centuries and hit 13 sixes in the tournament.

T David (Hobart-H): The hard-hitting Australian is the highest scorer for the Hurricanes in the ongoing season. Batting at number 5, in 10 matches David has scored 262 runs at a blistering strike rate of 176. He will be the one to watch out for on the fast track of Perth Stadium.