Past Champions in Australia T20 League 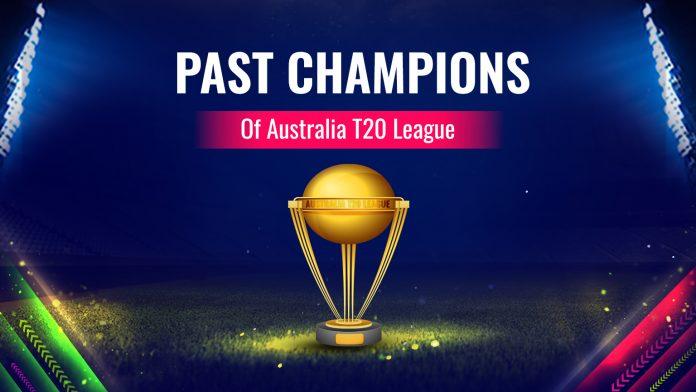 The Australia T20 League is a professional Twenty20 cricket league in Australia. Just like the Indian T20 League, the Australian series is immensely popular among cricket fans. The league was established in 2011 and since then, the league has quickly become one of the most popular cricket leagues in the world, attracting large crowds and a massive television audience.

The league puts a lot of effort into creating a fun and festive atmosphere at its games, with music, fireworks, and other attractions to keep the crowd entertained. This has made it appealing to families and casual sports fans, not just hardcore cricket fans.

In 2021, Perth-S played the finals against Sydney-S. The four-time champs defeated the Sydney-S team by a big gap. In the 2021 finals, Perth scored 171 at a loss of 6 wickets. In return, they stopped Sydney at just 92 runs. L. Evans was announced as the player of the match for his outstanding knock of 76 runs.

Sydney-S have won the Australia T20 League on three different occasions. The team famously won the inaugural season in a dramatic fashion against Perth-S, defeating them on their home soil.

However, since then, the Sydney-S came close to the trophy but couldn’t lift the trophy. All of this changed in 2019 when they defeated Melbourne-S by 17 runs. The following season, Sydney again tasted the gold by defeating Perth-S at the famous SCG stadium. In the 2020, edition, Sydney-S’ J. Philippe was named the Player Of The Series.

While Sydney-S and Perth-S were busy dominating the 2018 edition, Melbourne-R played smart cricket. The Stars reached the finals of the 2018 Australia T20 League and faced their arch-rivals, Melbourne-S.

The Docklands Stadium was jampacked by Melbourne-S fans. Eventually, Stars lifted the cup that year by defeating their opposition by 13 runs, which was by far the tensest match of the series.

Adelaide-S have won the Australia T20 League just once. The team won the 2017 edition of the tournament. In the last match, Adelaide-S faced Hobart-H. Eventually, the host team won the match by 25 runs. Batting first, Adelaide scored a gigantic total of 202 runs. During the innings, J. Weatheralds scored a century and became the Player of the Match.

While their arch-rivals Sydney-S have won the titles three times, the Sydney-T have captured the trophy only once. In the 2015 finals, Sydney-S faced Melbourne-S. Batting second, Sydney chased down the target of 176 runs. The opening pair of U. Khawaja and J. Kallis added crucial runs at the top. Moreover, U. Khawaja played a vital innings of 70 runs and was fittingly awarded the Player of the Match.

Brisbane-H won the second season of the Australia T20 League in style. However, since then, the Brisbane team has been unable to get close to the trophy. With the 2022 season nearing, the former Australia T20 League winners will be looking to rewrite history and lift the cup once again.

Before you get hooked to your screens and watch the Austalia T20 League, create your fantasy teams on MyTeam11. MyTeam11 is one of the most trusted fantasy apps in India and was recently awarded as the Best Fantasy Sports Operator at G2G Expo. So, what are you waiting for? Start Playing, Start Winning!