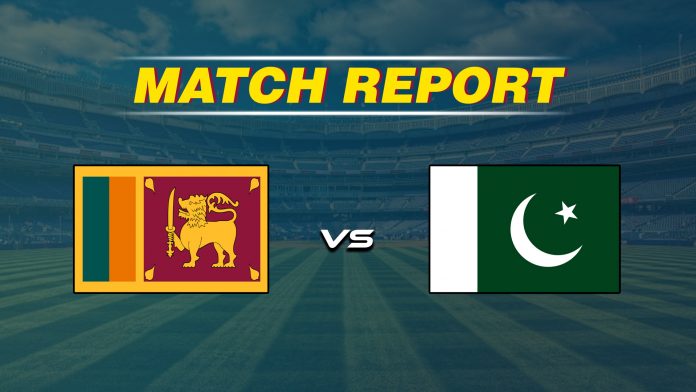 World T20 leader, Pakistan shook hands with defeat on Wednesday as Sri Lanka ended up whitewashing the hosts in a 3-game T20I series. Sri Lanka managed to pull off a close 13-run victory in the last game of the series held at Lahore. With the 3-0 series clinch, the Lankan Lions became the second country to ever whitewash Pakistan in T20Is, the first being England who defeated, the Shaheens in 2015 at UAE.

The game started with Sri Lanka winning the toss and picking to bat first. The game didn’t start on a good note for the visitors as they kept losing wickets every couple of over. They lost their first wicket in the third over at the score of 24 in the form of Danushka Gunathilaka. The player accredited as “Man of the Match” in the 1st T20 of the series, failed to create magic on the field. Within no time, Sri Lanka was three wickets down at a meagre score of 30 at the end of 5th over.

However, credits to Oshada Fernando’s brilliant innings of unbeaten 78, the Shanaka led team managed to put a satisfactory target of 147 onboard at the end of 20 overs.

Courtesy to Haris Sohail’s 52 off 50 balls comprising of four boundaries and 1 six, Pakistan managed to stay put in the game. However, it wasn’t much before the Sri Lankan leg-spinner Wanindu Hasaranga stumped Sohail in the 16th over of the game. Later on, he went to pick the likes of Imad Wasim and Pakistan captain Sarfaraz Ahmed in the 16th and 18th over respectively, shattering their hopes of winning the game. He wrapped up the game, limiting Pakistan to 134 with his figures of 3/21.

The game was a roller-coaster ride with both the teams, with it become quite difficult to predict the winner of the game, as the teams put in all their efforts. But the ball ended up in Sri Lanka’s court as they registered their first-ever T20 series whitewash.