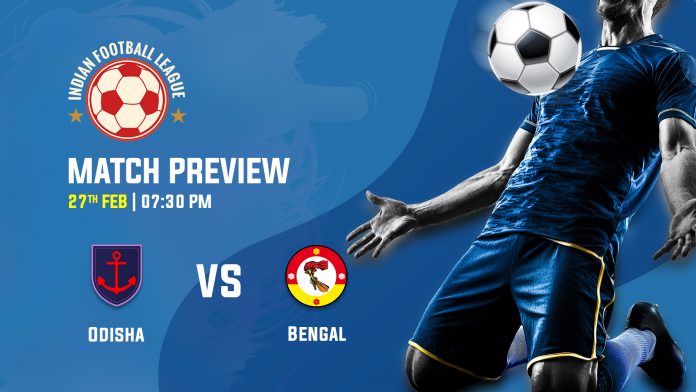 Out of the playoff's contention, Bengal will wrap up their debut season in Indian Football League 2020-21 when they take on Odisha tonight.

Bengal will end their debut season at Indian Football League tonight with a final league-stage clash with Odisha. Gold and Reds have some positives despite losing the playoffs berth. I-League giants had a poor start to the season, but they improved their game and earned some fine victories at midway of the tournament. In the last outing, they suffered their second consecutive loss to Northeast. Bengal made eight changes to their starting XI to offer some chances to its reserve players.

The first half ended without seeing any goal. Highlanders had a good start in the second half, and they took with a VP Suhair strike in the 47th minute. Bengal offered a second goal with an own goal from Sarthak Golui in the 55th minute. Gold and Reds tried to add a comeback when Sarthak Golui scored a goal in the 86th minute through a header, but they didn’t find the equaliser. Bengal lacked in the defense, and it cost them mostly in the final half. Robbie Fowler’s side would finish high on Saturday to come stronger in the next season.

Meanwhile, Odisha would forget this season after finishing last in the points table. Kalinga Warriors suffered their worst defeat in the last outing when Mumbai hammered them 6-1. Odisha were awarded a penalty in the early first half, and Mauricio scored a goal. Ogbeche equalised four minutes later, and Bipin Singh scored in the 38th minute to take the lead for Mumbai. Islanders didn’t stop here, and Ogbeche completed a brace with the 43rd-minute strike.

Goddard netted a goal just before the first-half break to make it 4-1. Bipin Singh scored the 5th goal in the second minute of the second half, and in the 86th minute, he completed his hattrick to secure a much-needed 6-1 victory. Mumbai showed full potential against Odisha, and Kalinga Warriors had no answer to this. Odisha managed to add just 9 points from 19 matches, and they won just one fixture this season. Odisha would also aim for a winning finish to this disappointing season.