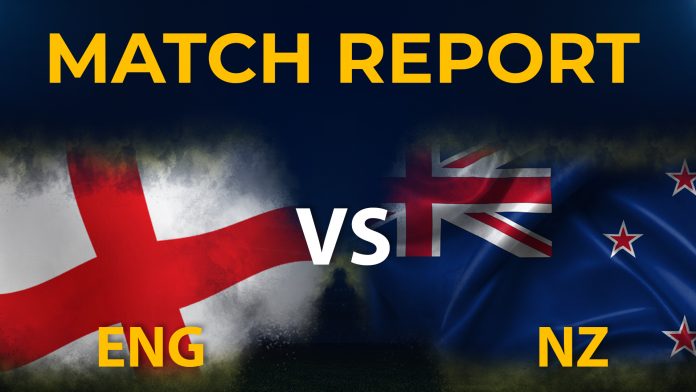 ‘History repeats itself,’ we have always heard, but so soon, we had never thought. It was something similar that we witnessed during the 5th T20I between England and New Zealand on November 10. The game looked like a T20 recap of the World Cup final, where both the teams met to clinch their maiden World Cup trophy. However, the only difference this time was that New Zealand ended up losing the game after falling short of 9 runs, which gave England a 3-2 victory in the T20 series.

Just like the World Cup, yesterday’s game was a neck-to-neck encounter that ended up in a tie leading to a Super Over. The game started with England winning the toss and putting New Zealand to bat first on a pitch that is preferable for chasing. The match was reduced to 11 overs after rain played a spoilsport.

The openers of New Zealand, Martin Guptil, and Colin Munro laid the foundations of the team’s batting, scoring 50 off 20 balls and 46 off 21 balls, respectively. However, it wasn’t much before Guptil fell prey to Adil Rashid in the 5th over and started a series of fall of wickets every couple of overs. New Zealand managed to put up only 146 runs on the board.

On the other hand, it was Jonny Bairstow for England who played an impactful inning for the team, contributing 47 runs off 18 balls before walking back to the pavilion at the end of 6th over. Eoin Morgan and Sam Curran continued the legacy and helped England tie the match at the end of 11th over.

The tie led to a super-over between the teams. Jonny Bairstow and Eoin Morgan from England took the field and together managed to pull-off 17 runs in the super-over. From New Zealand, it was Martin Guptil and Tim Seifert who came out to bat. Luck looked to be in England’s favor as they managed to sweep-in a 3-2 lead by winning the super-over.

Jonny Bairstow won the Man of the Match title, whereas Mitchell Santner was adjudged as the Player of the Series.