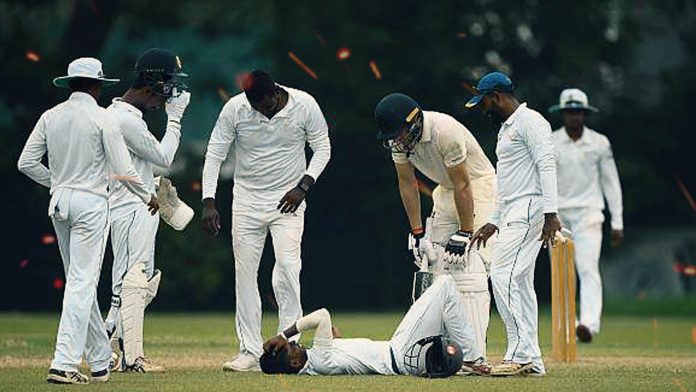 The second day of the first warm-up match between Sri Lanka & England witnessed a serious turn of events when young Sri Lankan player Pathum Nissanka was rushed off the field on a stretcher following a head injury after being hit by a ball.

The game was in the 56th over of England’s innings when the event eventually took place. It was Jos Butler on the crease with a score of 44 runs who hit a delivery from Nishan Peiris off to Nissanka, who standing at short leg with his helmet on to take hold of the shot. However, the ball hit Nissanka severely following which all the players at the field rushed towards youngster to know about the occurrence.

As soon as the players, bystanders & fielder ran towards Nissanka to analyze the situation, the sidelines were alerted to take the player off-field for medical treatment. The sidelines were then followed by Sri Lankan physiotherapist along with the medical team of England comprising team doctor Moiz Moghal, physio Craig De Wyman and masseuse Mark Saxby.

Nissanka after being hit by the ball on the head was conscious throughout the event but kept on complaining about severe neck pain due to which it became necessary in the viewpoint of the medical team to call for a stretcher and take Pathum to the nearest local hospital. As an aid for the injured player Oxygen support was also brought on the field.

The injury of the player led to a delay in the game leading to a tea break for team England with a score of 220 runs off 4 wickets as prior the incident Butler was dismissed with a total of 44 runs. The ball after hitting Nissanka landed up with Angelo Mathew who was standing at the leg slip, making Jos Butler walk back to the pavilion. The game resumed after the tea break with Moeen Ali replacing Jos Butler as the new player on the field.

We wish Nissanka a fast recovery till then stay tuned to know more about advancements & improvements in Nissanka’s health and other interesting cricket stories.