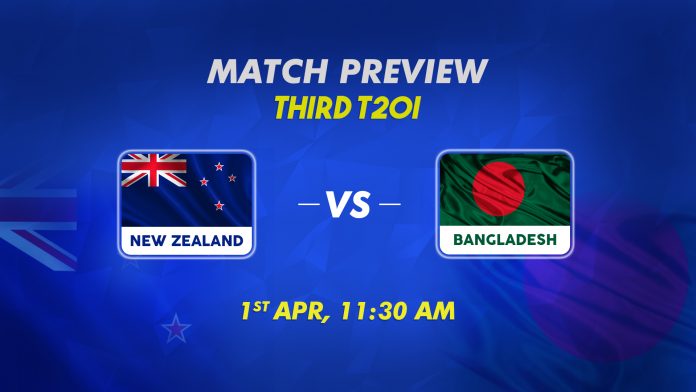 New Zealand will face Bangladesh in the third T20I to eye series whitewash. The hosts have already taken an assailable 2-0 lead in the series.

New Zealand will conclude their successful home season when they take on Bangladesh in the final T20I of the series. The hosts have been outstanding throughout the season and won 7 consecutive international series. They defeated Pakistan, West Indies, Australia, and Bangladesh in the T20I series. Kiwis have been tremendous and in all defeats, they outplayed oppositions with good margins. After winning the first T20I with ease, Blackcaps defeated Bangladesh in the second T20I with the D/L method. New Zeland lost three quick wickets but kept their run-rate high.

When the rain interrupted the game, New Zealand were 173/5, and Bangladesh got the revised target of 170 in 16 overs. Between the drama of this revised target, visitors fall short of 28. Only Bangladesh can blame themselves as they had no idea of this target and they batted slowly in the middle. Mohammad Naim scored 38 off 35 balls which hurt their chase. It was the poorest knock from an opener while chasing 10 runs per over. Soumya Sarkar tried to fill that gap with 27-balls 51 but the gap was huge and enough to decide the winner. Bangladesh’s wait for the victory in New Zealand continues and they would look to change the history this time. Visitors missed their key players who have been a regular part of the Bangladesh squad. Without Tamim, Rahim, and Shakib, Bangladesh are a half team and they got the task of changing something extra-ordinary.

New Zealand, on the other side, can proud of themselves with a remarkable home season. They made into the final of the World Test Championship and earned the top spot in Test Rankings for the first time. After losing to India and England in the last home season in 2019-20, New Zealand won all four T20I series this home season. Tim Southee will look to rest some key players for the final T20I. Finn Allen, Adam Milne, and Lockie Ferguson may miss out this fixture as they will fly to India for the Indian T20 League 2021 but management have no back-up player so Ferguson might be the only absentee.

Eden Park’s surface is a pure batting paradise. The outfield is quick and batsmen will take the chances considering the short boundaries. We may expect another high-scoring score game.

Handy with bat and ball