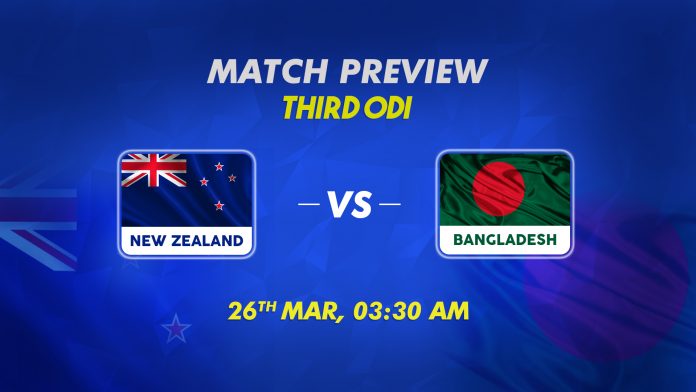 New Zealand will take on Bangladesh in the final ODI of the series to eye series whitewash. Kiwis have taken a 2-0 unassailable lead in the series.

New Zealand’s winning home summer continues and they won yet another series that came against Bangladesh. Visitors were slightly better in the second match but it wasn’t enough to stop New Zealand to take the series home. Tamim scored a gritty half-century under pressure but credit goes to Mithun who scored 73 off 57 balls to take Bangladesh 271. New Zealand didn’t struggle much in the chase. Devon Conway scored his maiden half-century and Tom Latham notched up his 5th ODI century. Conway and Latham’s century stand charged New Zealand to cross the line. Bangladesh had a chance when they picked three-wicket for 53 and but one partnership cost them a match. Bangladesh dropped four catches and it proved costly. Tamim scored 78 off 108 balls which is not an ideal ODI batting. His poor strike rate cut 15-20 runs from the first innings.

New Zealand are boosted and they won their fifth consecutive ODI match. They also earned vital 20 points for CWC Super League. Kiwis may rest its key players for this final match. Taylor didn’t feature due to injury and he might be available for this last match. Tim Southee didn’t play the first two matches and he will also lead the side in the T20I series so management can give him a match.

For Bangladesh, improvements are required considering their poor attitude in the field. They troubled Kiwis in the first ten overs but dropped catches at the crucial time. They lacked in middle-overs when the wicket was necessary. The slow batting in the start also hurt Bangladesh. It was a pure batting track and they fall short of 15-20 runs. One victory on this tour will be a big thing for the Asian side but they have to better their game like they did in the second game after the first ODI debacle. Someone has to take chance like Mithun who helped visitors to get a competitive total. Rahim and Mahmudullah both need to step up and take their role seriously in middle-overs.

Wellington’s surface is a batting paradise and batsmen just need to implement basic. The boundaries are short and the outfield is quick. It’s a track where 300 would be an easy total while batting first. Chasing would be an ideal call after winning the toss.