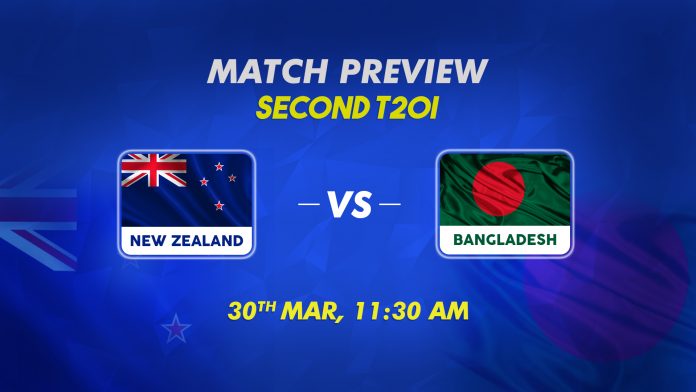 New Zealand will face Bangladesh in the second T20I to wrap up the series. The hosts have already taken a 1-0 lead in the series after winning the first T20I.

New Zealand and Bangladesh will meet again in the second T20I of the 3-match series. Tim Southee led the side in the absense of injured Kane Williamson and New Zealand made a good start to their final home assignment. New Zealand are undefeated in this long home summer and didn’t lose a single series. Out of three T20I series, they lost three games which are remarkable. They recently defeated Australia 3-2 in the T20I series at home. New Zealand introduced young players this summer and they found some new match-winner such as Devon Conway who is the leading run-scorer of the home summer.

Conway fired in the last game with scoring 92 off just 52 balls. Will Young also joined the party with 30-balls 53. New Zealand posted 210 and easily defended with fine bowling skills. Ish Sodhi bagged a 4-wicket haul. Finn Allen made his T20I debut in the last game but scored a duck. Kiwis will offer him a full chance as this 21-year-old opener scored 512 runs in Super Smash 2020-21 at an average of 56 and the strike-rate of 193. Lockie Ferguson came back after injury and picked two for 25.

Blackcaps overcame Bangladesh 3-0 in the recently concluded ODI series. They dominated the whole series and visitors didn’t even trouble Kiwis. New Zealand is the strongest side in this format. Martin Guptill was out of the form but he scored runs in the Australia series to get his form back. New Zealand looks slightly a different side after resting some key players. It might be another T20I series win for New Zealand. Since the 5-0 defeat to India at home, Kiwis lost just three games out of 12 matches.

Meanwhile, everything is going wrong for Bangladesh as their wait for a win in New Zealand continued. Tamim’s troops would look to get at least one victory on this tour to boost their morale. Shakib and Tamim’s absense hurt their goals and they lacked in their batting. After a long time, the batting trio, Tamim, Shakib, and Rahim were not part of Bangladesh’s T20I squad. The Bowling unit wasn’t so impressive and New Zeland charged the innings with ease. They looked dull in the chase of 211 and suffered a heavy defeat of 66 runs.

Changes are likely to happen but Bangladesh has to go with an attacking approach. T20 format may change their winning drought but it will not be an easy task. Mahmudullah and Liton Das both have to take accountability in the batting unit. New Zealand are the favourites to win this fixture and Bangladesh will wait for another day to change the history.

Napier’s surface is pretty good for batting. The outfield is quick and batsmen will take the chances considering the short boundaries. We may expect a high-scoring score from New Zealand. Chasing would be a better call after winning the toss.

Handy with bat and ball