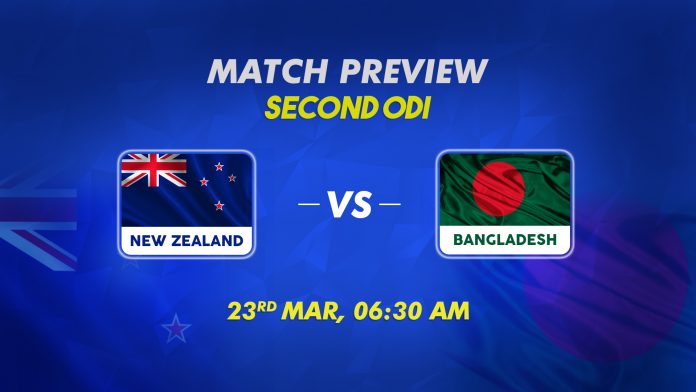 New Zealand will face Bangladesh in the second ODI to wrap up the series. The hosts defeated Bangladesh by 8 wickets in the first ODI at Dunedin.

New Zealand’s winning home summer continues and under Tom Latham, Kiwis will look to add a first series win in CWC Super League. Kiwis have been undefeated in the home summer. Bangladesh looked amateur in opening ODI and Kiwis thrashed the visitors by 8 wickets. Boult made a fine comeback in ODIs and grabbed his first wicket since World Cup 2019. He bagged a 4-wicket haul to lead the bowling. Bangladesh didn’t recover after early blows. New Zealand chased down 132 with losing two wickets.

Devon Conway made his ODI debut as well and scored 27. New Zealand rested Tim Southee to add Matt Henry and if they look to rotate the player, Southee may replace Boult for this match. Kiwis are the strongest side at home and they didn’t play much ODI cricket since their final at Lord’s in 2019. They defeated World No. 2 India 3-1 in their last ODI assignment. Martin Guptill and Henry Nicholls are in good form. Conway is a great talent and he will take the role of Kane in this series. Will Young and Tom Latham will play sheet-anchor in middle-order. James Neesham and Daryl Mitchell are the big finishers for the hosts. They are favourites to seal the series with this game.

Meanwhile, Bangladesh’s low-confidence against the big teams delivers poor performance. They had a poor history in away matches and it started in a similar fashion when they were bundled out for just 131 in the opening ODI. The successful opening duo Liton and Tamim failed to extend their show. Rahim and Mahmudullah looked solid and they got the start but couldn’t convert into big. They failed to rotate the strike in middle-overs. Visitors have to play their best game to defeat New Zealand. They cannot win a single match with this approach. The home success against the weak West Indies side improved their numbers in CWC Super League but they have to climb up high if they want to avoid playing in qualifiers. Tamim can make few changes in the squad.

Christchurch’s surface is an ideal track for ODIs. Short boundaries can help batsmen to get big scores. It’s a surface of 300 plus totals and chasing would also be easier. Pacers will take early help from the pitch.