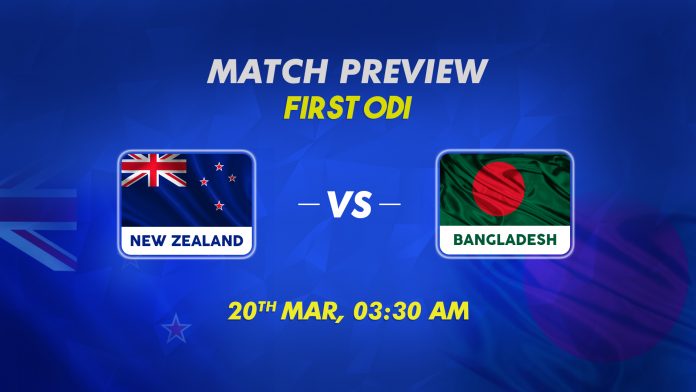 New Zealand and Bangladesh will meet in the opening ODI of the series. It will be the first CWC Super League assignment for New Zealand.

Bangladesh will start their white-ball tour to New Zealand with the first ODI in Dunedin. Kiwis will be back in action after the 3-2 T20I series triumph against Australia and it will be the last home assignment for them. New Zealand will miss their main skipper Kane Williamson due to injury and Tom Latham will lead the side for this series. Ross Taylor is the latest absentee. It means T20 performer Devon Conway will make his ODI debut on Saturday. Conway has been a standout performer of the home summer. Will Young and Mark Chapman are the other two players who might be added to the final XI. Boult, Southee, and Jamieson will lead the pace-attack and Santner will be the only spinner. Guptill got his form back in the last Australia series and it’s a great sign. In the absense of Taylor and Williamson, Kiwis would rely on Guptill and Latham to offer a good start.

New Zealand are undefeated this home summer and won all series since COVID. They beat West Indies, Pakistan, and Australia but haven’t appeared in the 50-overs format. They last played an ODI game one year ago against Australia and then, the series was postponed due to COVID. 2-times World Cup finalists will mark their first appearance in CWC Super League. Kiwis have a good balance of young players and experienced players. They are favourites to outplay another Asian side at home.

Meanwhile, Bangladesh will play their first away game in CWC Super League and they already grabbed full 30 points after taking a clean-sweep against West Indies at home. They will take this series as a preparation for upcoming ICC events. Tamim Iqbal took the charge after 2019 World Cup and he lost his first series in Sri Lanka but the success at home would give him more confidence. Bangladesh also handed ODI caps to two players in the last series and Hasan Mahmud look solid to feature in the playing XI. Shakib hasn’t included in the squad due to injury and personal reasons so Mithun may get the game. Tamim was in good form at home, accumulating 158 runs in 3 innings and Mehidy Hasan picked 7 wickets.

Since 2019 WC, Tamim has scored 468 runs at an average of 93.60 and Liton Das has aggregated 347 runs. The duo needs to perform in seaming conditions. Mustafizur Rahman’s performance would matter the most in New Zealand. The pace-attack of Bangladesh is not convincing which may hurt their chances. In the absence of Shakib, the middle-order will struggle and all the responsibility will rely on Rahim who has a good experience of playing in New Zealand. Bangladesh are the underdogs and if they manage to get a single win on this tour, it will be a big thing for them.

Dunedin’s surface is an ideal track for batting and it will provide lot of runs in both innings. Its a surface of 300 plus totals and chasing would also be easier. New Zealand have chased down 336 on this track in 2018 so the toss will play an important role.