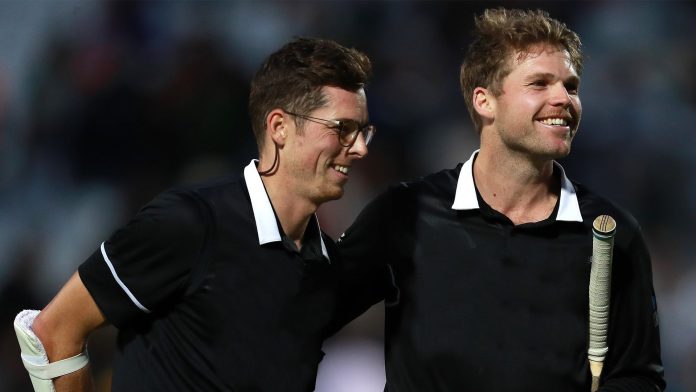 New Zealand defeated Bangladesh in a thrilling match by two wickets to become the first team to register two wins in World Cup 2019. Chasing 245, the Kiwis achieved the target with 18 balls remaining. For New Zealand, veteran batsman Ross Taylor was the highest run scorer with 82 runs off 91 balls.

After winning the toss New Zealand skipper, Kane Williamson asked the Bangladeshi team to bat first. For Bangladesh, Shakib Al Hasan playing his 200th One-Day international match played a crafty inning of 64 runs off 68 balls else no other batsman cashed in on good starts.

Although the Bangladeshi openers Tamim Iqbal (24) and Soumya Sarkar (25) gave the team a solid start, but couldn’t capitalize on the start they got.  After this initial destruction, Mushfiqur Rahim collaborated with Shakib Al Hasan to add 50 runs for the third wicket to rebuild the innings for Bangladesh before Martin Guptill dislodged the stumps while he was in the middle of the run.

After this Bangladeshi middle-order batsmen Mohammad Mithun (26), Mahmudullah (20) and Mosadeek Hossain (11) got starts, but none of them converted the start to a big inning. In the end, the Bangladesh team could not even play their full 50 overs and got out at 244.

Chasing the target of 245, the blackcaps opener, Martin Guptill and Colin Munro gave the team a flying start but Bangladeshi all-rounder, Shakib Al Hasan dismissed both of them within powerplay overs. Skipper, Kane Williamson along with Ross Taylor added 105 runs for the 3rd wicket to take the team to a commanding position. But, after Williamson was caught by deep mid-wicket fielder, the kiwi’s batting collapsed due to the pressure. They lost three wickets for only 27 runs before Mitchell Santner, and Lockie Ferguson held their nerves to take the team to victory.

After this thrilling win, New Zealand placed themselves to top of the points table with two consecutive wins.

Ross Taylor bagged the ‘Man of the Match’ trophy for his outstanding knock of 82 runs.