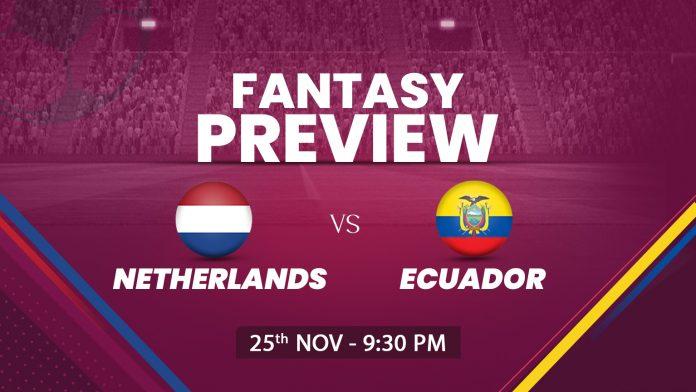 After their brilliant wins in their respective games, Netherlands and Ecuador will clash in another battle of Group A. The Netherlands vs Ecuador match will be an exciting one to watch because so far, the underdogs have performed tremendously well in the tournament. The match will happen at the Khalifa International Stadium at 09:30 pm IST. So, let’s dive straight into fantasy prediction for the match.

The Dutch team started their Football World Cup 2022 campaign with a win. In the first match, Netherlands faced Senegal where C. Gapko scored two magnificent goals. M. Depay missed the first game, but the fans are hoping to see him in the upcoming match against Ecuador.

The defensive abilities of V. van Dijk helped the Dutch team to keep a clean sheet. Many fans believe that in this edition of the Football World Cup, Netherlands has a fair chance of lifting the cup.

Ecuador’s E. Valencia scored two goals to seal the fate of his nation in the first match. However, their next match with the Netherlands will be nothing short of an uphill battle.

The 19th match of the Football World Cup between Netherlands and Ecuador will take place at the Khalifa International Stadium. The stadium is also known National Stadium and is situated in the city of Doha.

The Khalifa International Stadium has a seating capacity of over 45,000 seats. However, the stadium witnessed a record-breaking attendance during Germany vs Japan match – 47,447.

Gapko (Netherlands): C. Gapko broke the deadlock between Netherlands and Senegal in the last match. The forward player created some wonderful chances and eventually scored a goal for himself.

Valencia (Ecuador): E. Valencia created history in the first match of the Football World Cup. Ecuador’s forward made breakout runs with the balls and scored two back-to-back goals for his nation.