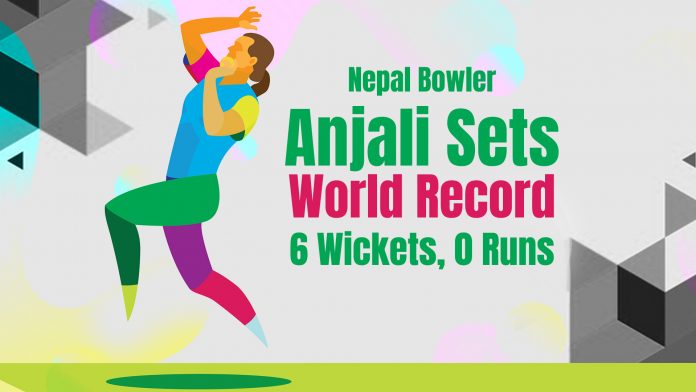 Nepal’s woman bowler, Anjali Chand, scripted history by producing the best-ever bowling figures in the Twenty20 International cricket. This is the first-time ever any bowler has taken six wickets for no run in an international match. Anjali Chand achieved this feat in the match against Maldives at the 13th South Asian T20 Game in Pokhara today.

Anjali scalped six wickets and conceded no runs, leading the team to a thumping 10-wicket victory against Maldives with 115 balls remaining. Chand’s heroic efforts helped Nepal in chasing down the target in just five deliveries without losing a single wicket. As a result, Maldives was bundled out for just 16 runs.

Anjali’s bowling figure of 2.1-2-0-6 is the best figure in the history of T20 format. Earlier, the record belonged to Malaysian female cricketer Mas Elysa, who had claimed six wickets for three runs from her 4 overs against China women in January this year. 24-year-old Anjali has also broken the record in men’s T20 internationals. Her bowling figure surpassed the record of Deepak Chahar, who took 6/7 against Bangladesh in Rajkot. Deepak now stands at No. 3 in the list of best bowling figures in the T20Is across both Men’s and Women’s cricket.

What’s even more surprising is the fact that Anjali was one of the two debutants for Nepal in this game and expecting such an incredible performance in T20 debut is highly impressive.

The Maldives players who fell prey to the bowling prowess of the medium-pacer Anjali Chand are as follows:

Apart from Anjali, Karuna Bhandari claimed a couple of wickets, while the remaining two batters were run outs. Opener Kajal Shrestha completed the chase in 0.5 overs and contributed to Nepal’s victory.

Nepal is slated to lock horns with Bangladesh Women on Wednesday.