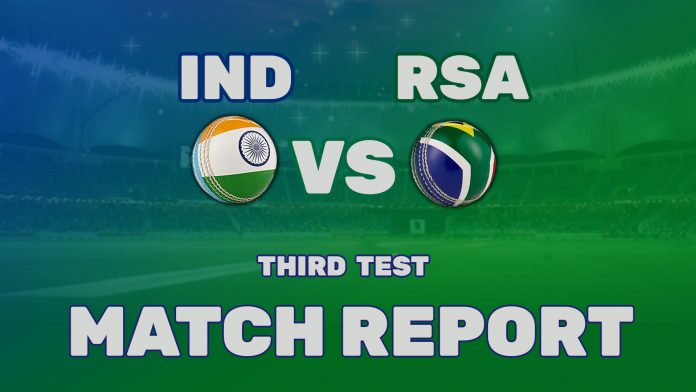 The Indian team was at its supreme best at JSCA stadium on Tuesday as it took mere 12 balls for team to wrap things and achieve history on the fourth day of the Ranchi Test. After Mohammed Shami bowled a probing first over, Shahbaz Nadeem took the remaining wickets quickly and India secured an innings and 202-run win to achieve a 3-0 cleansweep of South Africa. This was the first time India had whitewashed South Africa in Tests while this was the first time South Africa had lost two consecutive Tests by an innings in 84 years, having suffered the fate in 1935 against Australia at home.

Shami opened the proceedings on the day and Theunis de Bruyn, the concussion substitute who batted in place of Dean Elgar who was laid low by a blow to the helmet by Umesh Yadav on the previous day, got a leg bye. Anrich Nortje, who had survived 55 balls in the first innings, managed to negotiate Shami solidly.

In the past two matches in the series, the ninth wicket partnership or the tail have frustrated the Indian bowlers but on this occasion, there would be no repeat. After bowling four balls, Nadeem decided to take Wriddhiman Saha's advice. The Indian wicketkeeper was seen advising that the odd ball would keep low and he decided to unleash such a delivery. Nadeem landed a flatter delivery on a good length and it shot through low, de Bruyn was on the backfoot and looked to punch it to the off side. He got an inside edge and Saha took a sharp, low catch.

The end came in the very next delivery and in bizarre circumstances. Nadeem bowled a flighted delivery and Lungi Ngidi drove it hard to the right of the bowler. However, Nortje was in the way and he could not get out of the drive in time, it hit his shoulder and lobbed up to Nadeem who took a simple catch and the victory was complete. Nortje was in tremndous pain and Ngidi, along with the Indian fielders, checked on him but he was alright and Virat Kohli, along with his team, proceeded to celebrate with other team mates.