MyTeam11 Series Round Up: Dominant India decimate West Indies in all three formats 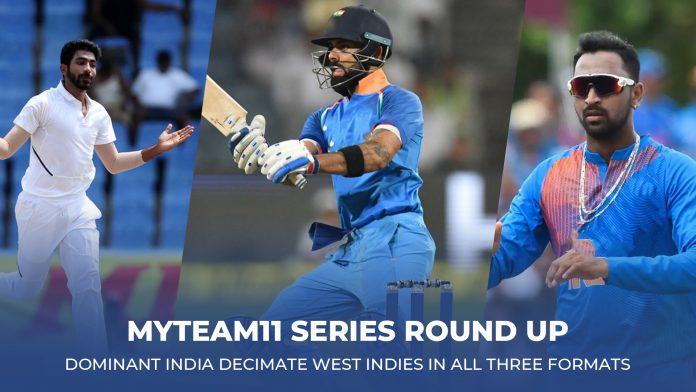 MyTeam11 series initiated with Team India’s belligerent all-round performance in the three-match T20 series that took place on August 3, 4 and 6. The first two T20 Internationals were played at Florida USA where Virat Kohli and his troops outplayed the Caribbean giants. However, after defeat in the first two matches, Carlos Brathwaite led side flew to their home but even there the team showcased ordinary performance as the result of which, the Men in Blue whitewashed the Windies in the T20 series and clinched the series 3-0.

After a disappointing performance in the T20 series, West Indies met Indian team at Guyana to play the first of three One-Day International series. However, this time format changed but the Windies fortunes remained the same. Despite the first match that was washed off, Jason Holder led side lost the series by 2-0, thanks to brilliant performance by Indian skipper, Virat Kohli who scored two consecutive centuries.

After displaying sensational performance in T20Is and ODIs, Team India were the favorites to win the Test series also. With the type of performance, Indian players showcased in entire series, 2-0 was on the cards.

However, the West Indies giant got a dazzling start in first Test Match as Windies pacer, Kemar Roach destroyed the Indian top order on the first day. But Indian middle-order batsman exceptional performance followed fiery spell by likes of Jasprit Bumrah and Ishant Sharma took the game away from West Indies. Jason Holder led side lacked intensity in the second Test too as the result of which India recorded their eighth straight test series win over them.

Apart from this, Team India placed themselves to the top spot in the World Test Championship table with 120 points.

Here are some infostats of the entire series