MyTeam11 Awards: Cricket Stars & the Weird Titles they should get based on their Habits 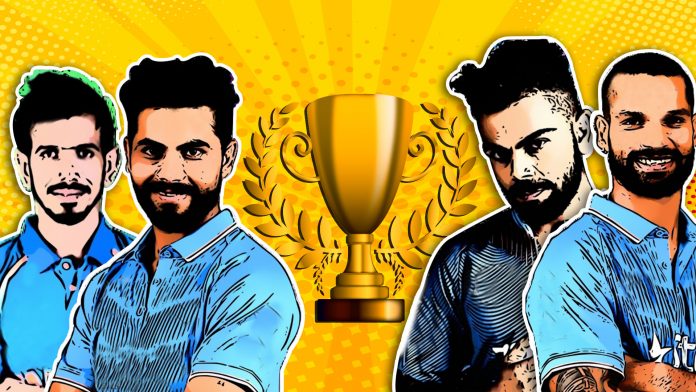 We have a cricket team that is shining as superstars with their hard-hitting performance for quite a time now. Their skills speak more than themselves & often they were seen being compared to superheroes. Well, enough of the superpowers that they might have as superheroes, it’s now time to unveil some rarest of rare secrets of Indian cricket players & honor them with some amusing title.

We’ll inaugurate the ceremony by awarding the first title to the Hitman of the Indian cricket team, Rohit Sharma. The award for the laziest cricket player in the national team goes to the player. If the statements of other cricketers are to be believed then our “Mr. Aalas se Majboor” can sleep anytime anywhere, even at the most uncomfortable place. Basically, he’s a sleepy-head.

We all have that one guy in our group who is the most innocent among all and the most innocent in the Indian cricket team is Cheteshwar Pujara. It is said that the player who runs far away from girls is our “Mr. Sanskari.” Further in an interview the Captain of the Blue Army was seen quoting that Pujara prays somewhat 5 times a day, runs away from girls, has puja in his name and even the name of his wife his puja. Sanskaar hi Sanskaar, you see.

Call him the Gabbar of the team or the Jatt, Shikhar Dhawan is for sure an entirely Desi package one can find in the team. The player has big mustaches, a Haryanvi accent and lives his life to the fullest like a happy-go-lucky individual. It looks that Dhawan still carries the desi values inside him which are quite evident on the field. Thus, he is our “Mr. Desi Dude.”

Ravindra Jadeja is not only an all-rounder that can score big hits & haul huge wickets with his fast bowling skills but also a home to an imaginary & creative mind that can make you question your intellect. The player is famous for mentioning things that are hard to believe let alone coming true. In an interview when Virat Kohli was asked about a player who boasts the most, he mentioned Ravindra Jadeja. The player even quoted some incidents out of which one was Jadeja mentioning that “There are two buildings in his hometown that are nearing each other by a distance equal to a rice grain & the day both the building will meet, the world will end.”

Yeah, we know what you people might be thinking, “the lean physique of Ishant Sharma does not comply with the title given.” Right? We too thought the same but the same interview where Virat unveiled Jadeja being the player who boasts the most, he busted the bubble regarding Ishant & his eating habits. Ishant Sharma is one of the players who is hungry all the time & keeps on wondering “Ab kya Khaun yr?” Thus, the title “Mr. Sab Kuch Kha Jau.”

It is obvious that each and every cricket fan would be aware of this title. We all have seen the Indian captain, Virat “King” Kohli getting all aggressive on the field. His aggression amid his early days in the game got him the title of “Angry Young Man.” Not only on-field but even off the field the player was often seen letting things take on to his nerves. No doubt he looks quite hot when aggressive (*wink*) & thus, “Mr. Garam Mizaaj,” that is what we would like to title our captain.

Apart from being famous for his breath-taking bowling skills, this young lad is also famous for having a sharp mind & representing India at Chess in youth championships. The player is known for his intellect & having a great presence of mind. Thus, the title “Mr. Paanchvi Paas se Tez” is a perfect fit for the player.

Well, now it’s the closure time, we would like to mention that these awards were just pure fun and didn’t mean to disgrace or defame our prominent players. We hope you enjoyed your read, if yes then drop your views in the comments below. Also, if you know any other player who should have been awarded in this ceremony then do let us know. Till then stay tuned to keep receiving the latest sports updates & hear the unheard sports stories.