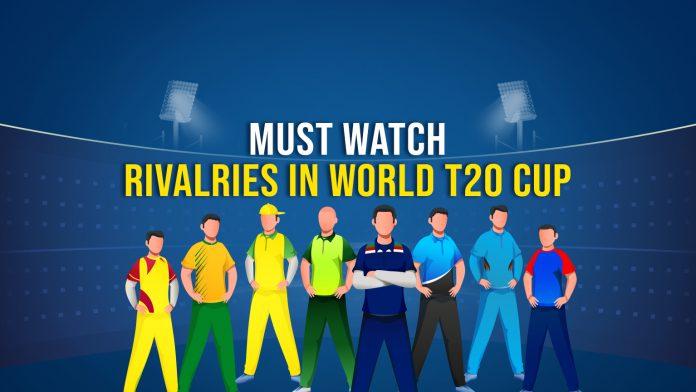 The World T20 Cup is just around the corner. With players getting ready for the biggest T20 carnival of the year, some teams are destined to meet each other on big stages and when they meet, magic happens on the ground. Here is a list of ‘Must Watch Rivalries in World T20 Cup’ for you to keep an eye on.

When Australia and India face each other, you can cut the tension with a knife. There have been countless legendary moments between these two teams and it is well documented. The two Goliaths of the cricket world will meet again in the World T20 Cup.

When it comes to the World T20 Cup, India and Australia have faced each other in some of the most epic encounters in history. In total, they have played 5 matches and out of those, the Men in Blue emerged victorious in three.

Even though Australia has fewer victories than India, the Kangaroos won the World T20 Cup in 2021, which gives them an edge before the tournament. On the other hand, team India must be looking forward to surging the score to 4-2.

The rivalry between Australia vs England is one of the most beautiful stories told by cricket. From Ashes to fiery T20I matches, the two teams have always been at each other’s throats. It is believed the sporting rivalry between the two teams began when in the 19th century, a local British newspaper published that “nothing good comes out of Australia”.

The biggest showdown between England and Australia happens in the Ashes, which is a 5-game series every 4 years. Australia has a slight edge over England with Australia leading the series 130-106. However, in World T20 Cup matches, the English lions have a leg up against the Kangaroos (2-1).

Perhaps, the biggest victory for the England team in the World T20 Cup came when they defeated Australia to lift the cup in 2010. In 2022, both teams are in red-hot form moving into the tournament.

There is no more bitter rivalry in the history of this gentleman’s game than the rivalry between India and Pakistan. The two neighbouring countries have collided many times and each time, the bar raised to new heights.

When it comes to the must watch rivalries in World Cup T20 Cup, India vs Pakistan matches top this list by a long shot. The two teams have collided a total of 6 times in World T20 Cup, out of which, the Men in Blue have emerged victorious 4 times.

Furthermore, India won the first-ever World T20 Cup in 2007 against Pakistan in the finals. That match changed the fate of T20I matches, as they became the mainstream attraction of the cricket world.

Recently, these two teams got a taste of each other in the Asian T20 Cup, where they performed brilliantly. With Pandya and Rizwan becoming the pillars of the team, the matches between India and Pakistan will be worth watching in the World T20 Cup.

These are the must watch rivalries in the World T20 Cup to look out for in 2022! These teams have some of the best players on the planet right now and they are in tremendous form. These teams will surely make the World T20 Cup more fun and a nail-biter tournament this year. If you are a great fan of fantasy cricket and already planning your World Cup winnings, surely look out for these teams on the field. Create your fantasy teams on MyTeam11! Keep playing, keep winning!