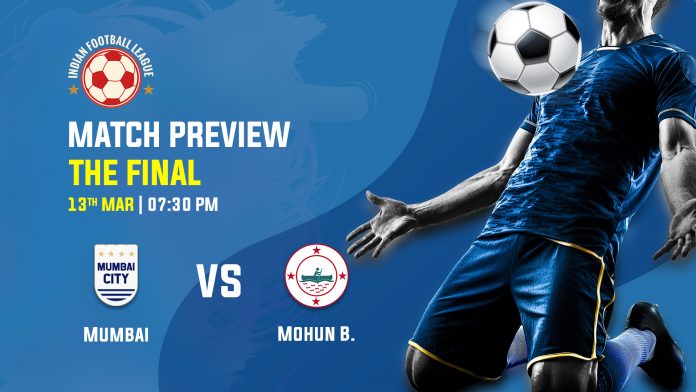 Two Indian Football heavyweights Mumbai and Mariners face each other tonight to decide the winner of Indian Football League 2020-21. It will be the maiden final for Mumbai and Kolkata giants had won three titles before merging to the I-League club.

Sergio Lobero’s Mumbai and Antonio Habas’ Mohun B. will battle out in the high-voltage final of Indian Football League 2020-21. Mumbai managed to seal the maiden berth in the final of the tournament after the semifinal success over Goa, while Mariners overcame strong Highlanders in the two-legged semifinal. Both sides previously met each other for the shield trophy and Mumbai overcame Habas’ men on goal-difference in points-table. Mumbai have also earned the qualification for AFC Champions League.

Mariners defeated Northeast in the second-leg game at the Fatorda Stadium in Margao. David Williams broke the deadlock in the 38th minute to provide Mariners an early lead. Manvir Singh made it double with another 68th-minute strike. Highlanders replied back with a 74th-minute goal from VP Suhair but they couldn’t get the equaliser.

In the first leg encounter, Antonio Habas rested Sandesh Jhingan and Tiri due to injury concerns. Carl McHugh and Pritam Kotal looked rusty in first-leg. Jhingan and Tiri came back and performed high. Jhingan made 6 clearances and one interception and Tiri made 9 clearances and one tackle. They also kept Northeast’s top-players Idrissa Sylla and Deshorn Brown silent. Roy Krishna will be a key player who has scored 14 goals this season, joint-most this season. The Fijian has rescued Mariners various times in the league-stage. In the second-leg game, Krishna released David Williams with a through pass, and the Aussie player beat Mashoor Shereef and Ashutosh Mehta to sent the ball into the net. The Fijian also released Manvir on the right flank to provide a second goal.

Meanwhile, Goa fought hard against Mumbai but Islanders managed to win the game on a penalty shoot-out. After playing a draw in first-leg, both sides settled for a goalless draw in full time. Lobero’s men nicked it by a 6-5 scoreline in the penalty shootout. They can make the double if they win another trophy. Sergio Lobera sent Bartholomew Ogbeche on the bench in the second leg game. The match went into a penalty shootout and both managers decided to switch their goalkeepers. Naveen Kumar replaced Dheeraj Singh and Phurba Lachenpa came for Amrinder Singh. Rowllin Borges scored the crucial penalty to send Mumbai in the maiden Indian Football League final.

Both sides met twice in the tournament and both times, Mumbai defeated Mariners with ease. In both games, Habas’s men failed to score any goal. Mariners are known for their better defense and they conceded just 17 goals this season. Mumbai showed their dominance in attack with scoring most 37 goals this season. Mumbai looks favourites after the current success. Mariners have to play their natural game and the strategy from both managers will also play a vital role.