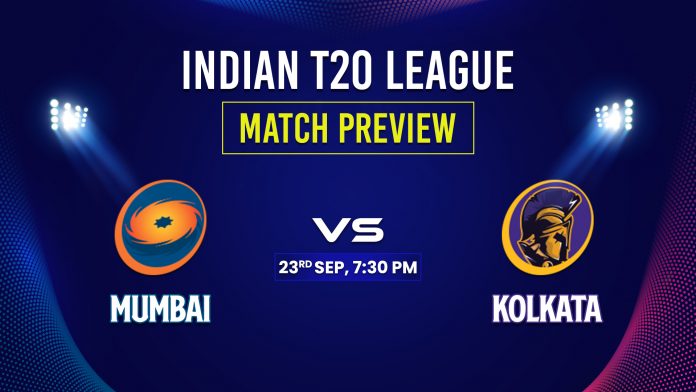 The 34th match of the Indian T20 League is scheduled on Thursday, the 23rd of September. The match will take place in the Sheikh Zayed Stadium in Abu Dhabi between Kolkata and Mumbai at 7:30 PM IST. The recently concluded match between Punjab and Rajasthan resulted in Rajasthan's favor which pushed them up in the points table. Mumbai is currently at the fourth place and is trailed by Rajasthan because of the NRR. Although Mumbai is known for starting slow, they need to keep up their game in order to remain among the top 4.

On the other hand, Kolkata is behind Rajasthan on the points table but still stands a chance to make it to the playoffs if they start to win in a consistent manner. Kolkata's current position in the points table doesn't look so good as they have won just 3 matches out of 8, and in order to sustain in the League they need to win at least 4 of their remaining matches.

The 34th match can be said as one of the crucial matches of this season as it would be a fight for the 4th position in the points table. If Mumbai loses this match Rajasthan will take the 4th place if they manage to win their next game against Delhi. Kolkata has to convert this match in a win by hook or by crook.

The start of the second phase of this League was not on a very good note for Mumbai as they lost to Chennai. They had an easy win against Chennai but their bowlers gave up a lot of runs in the death overs which eventually led them to a defeat. Though their batting order is better than others, they need to work on their bowling part.

With Rohit Sharma back in the squad, the opening pair with de Kock is remarkable. Further, along with Suryakumar, Ishan and Pollard in the middle order, the batting line-up of Mumbai is incredible. Rahul Chahar being at his best, the squad looks balanced. They weren't lucky in their previous match and couldn't stop Chennai but they look determined to win their upcoming matches.

Starting with a win in the second leg of the League, Kolkata looks good with their squad and has proved to be a worthy contender for the top four places. If they manage to win against Mumbai, the road ahead would be easier for them as they will climb up in the points table leaving Rajasthan and Mumbai behind them.

The weather at Sheikh Zayed Stadium is sunny with temperatures ranging between 29 to 39 degrees Celsius. The probability of rain is zero.

The surface of the pitch at Sheikh Zayed Stadium is expected to get slow as the match progresses. The average score recorded on this pitch is 170. The toss-winning team is expected to bat first.