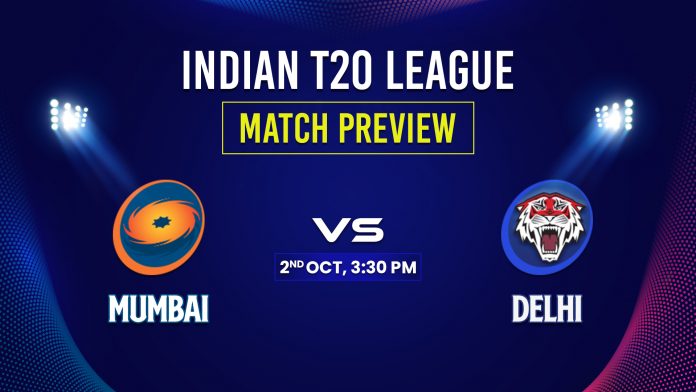 Mumbai will take on Delhi in the 46th match of the Indian T20 League 2021. The match will take place in the Sharjah Cricket Stadium on Saturday, 2nd of October. The last time Delhi played at this venue, they suffered a loss against Kolkata. If Delhi wins this match, it will become the second team to qualify for the playoffs, but it won't be an easy task given they will be playing against Mumbai.

Rishabh Pant's men have performed beautifully in this season and they are a worthy contender for the trophy. Prithvi Shaw's injury might act as a setback for the team, but still have a pretty balanced squad. Rishabh Pant and Shreyas Iyer will mainly take the responsibility of scoring runs in the match.

Mumbai, on the other hand, is lagging behind in the league. With 5 titles, Mumbai is the most successful team in the history of the league but they need to stride harder in this race to the playoffs to secure a position. The defending champions have Pollard as one of their assets, who also is the batsman standing on the second position in the list of highest run scorers during the death overs and will play a crucial role against Delhi in Sharjah. Mumbai is also coming from a win against Punjab and would want to maintain the streak to get to the playoffs.

The maximum and minimum temperatures at Sharjah will be 38 and 30 degrees respectively with no chances of rainfall. The humidity will be around 56 percent and the wind speed will be at 21 km/hr.

Keeping previous matches in consideration, Sharjah's pitch isn't helping batsmen like it used to in the previous season. Even though the boundary is short, the outfield is considerably slow and getting runs has been a task for batsmen. The spinners will dominate the game. The toss-winning team would most likely opt for bowling as defending a low total is a tough task here.