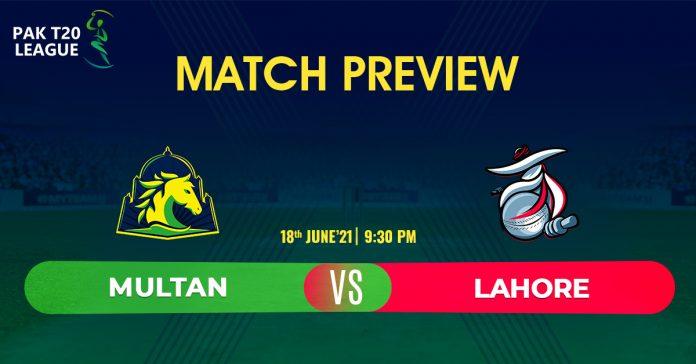 Lahore will face Multan in their final outing of the season tonight. It’s a do-die game for Lahore after a 7-run defeat last night to Karachi.

Pak T20 League 2021 is in its final days and tonight, there is only one game between Lahore and Multan. Lahore made a good start by defeating Islamabad but then, the story turned around. Abu Dhabi leg delivered disappointment for them. Lahore will now play their final game of the season which will decide their future.

Last night’s encounter was important for them but they fell short of 7 runs despite some late efforts from Tim David and Faulkner. Chasing a target of 177, Lahore’s start was not convincing as they lost three wickets in the first ten and their run-rate was around 7. After losing five on 92, it was Karachi’s game but Faulkner and David added quick 58 runs for the 6th wickets and kept Lahore in the game. They might have crossed the line but Karachi held the nerves.

Lahore have 10 points from 9 matches and they lost three out of four in the last two weeks. If they win tonight, they will book their place in the playoffs as their rivals Karachi can reach a maximum of 10 points. If they lose, then they can aim for Karachi’s defeat in the last game or if Karachi wins, they have to look for the NRR system. Lahore would avoid such things and look to get two points. They rely on their overseas players and the poor show of local players is hurting them.

Meanwhile, Multan did a reverse thing in Abu Dhabi and they are unbeaten here. They have won all three games after a disappointing Karachi leg. With two more games to go, Multan is in the safe zone and they need just one win to secure the playoffs qualification. In a previous encounter, they hammered Quetta by 110 runs which have boosted their NRR. Masood’s half-century and Tahir’s 3-wicket haul did the job.

Multan have eight points now and they can reach a maximum of 12 points. If they lose here, they can still qualify by winning the last game. Their net run rate is so strong as they can get the entry into playoffs with better NRR. Their team combination is ticking all the good points and they are likely to crack playoffs now. They also have a good record against Lahore and won three matches out of the last five. All three wins came while chasing the targets.

Abu Dhabi’s surface is allowing good batting in night matches and we can expect another high-scoring game tonight. Dew might be a factor to avoid any extra help to pacers. Spinners will still be crucial as they can get some help from the pitch.