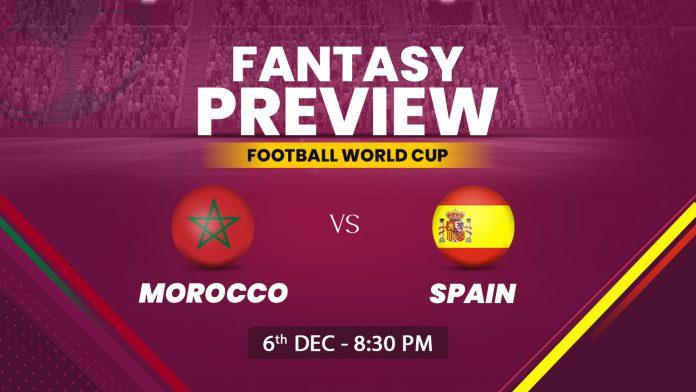 In Match 55, neighbours separated by the Strait of Gibraltar, Morocco and Spain will face each other at the Education City Stadium in the pre-quarterfinals. Typical of this World Cup, Morocco is another dark horse team who have reached the pre-quarterfinals for just the second time in World Cup history. 2010 champions Spain, playing in their 16th World Cup, have looked like the best team in the tournament so far. Let’s look at the fantasy team prediction for the match and read till the end if you want to see suggested fantasy XIs.

The golden generation of Moroccan football powered the team to the summit of Group F and into the knockout stage for only the second time in their history. The Morocco national team has shown a very physical and technical style of play. In the 2022 World Cup, they have a built reputation for being a tough team to play against and are capable of causing problems for even the best teams in the world. Hakim Ziyech, Achraf Hakimi and Youssef En-Nesyri have been Morocco’s standout players in this World Cup.

Spain has performed well in the tournament so far, scoring 9 goals in 3 matches and making the highest number of passes (2,737) in the tournament. This strong showing has earned them a place in the knockout stage, where they will face Morocco. Spain will be looking to continue their good form and use their passing abilities to break down Morocco’s defence and score goals. If they can maintain their high level of play, they will have a good chance of advancing to the next round.

Education City Stadium will host the penultimate fixture of the Round of 16 between Morocco and Spain. After the World Cup, the stadium will be used by several university teams under Qatar Foundation. The match will start at 8:30 PM IST on 6th December and lineups will be available at 7:30 PM IST on MyTeam11 fantasy app.

A Hakimi (Morocco): The PSG full-back is known for his explosive pace and will be lethal on the right wing alongside Ziyech. Morocco generally sits back in defence relying on their defenders and counter-attack at every given opportunity through Hakimi. He will be a player to watch out for against Spain.

A Morata (Spain): The 30-year-old striker is playing his first World Cup and is the leading goal scorer for La Roja. Morata has scored 3 goals and provided 1 assist in 3 appearances. In the next match, Morata needs to display his scoring prowess and find ways to get on the scoresheet. His ability to make clever runs, get into goal-scoring positions and clinical finishing in front of the goal can help Spain in the knockout stage.