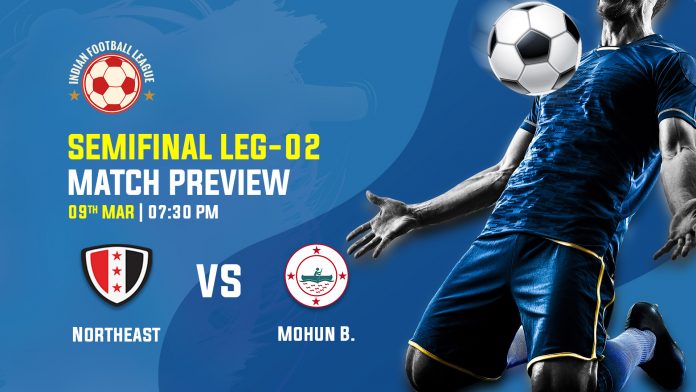 Northeast and Mohun B. will meet in the leg-02 semifinal of Indian Football League 2020-21. The winner will face Mumbai in the final on March 13.

Northeast and Mariners will lock horns in the second leg semifinal of Indian Football League 2020-21. Habas’ men played a competitive 1-1 draw in the first leg semifinal and now, both sides battle out to find the place in the final. Mariners allowed Highlanders to equalise after taking a 1-0 lead from around the half-hour mark. David Williams scored a fine goal in the 34th minute through a good cross from Roy Krishna. Idrissa Sylla struck a goal in injury-time to end the game in a 1-1 draw. Mariners conceded the least goal in 2020-21 with 15 but they have to improve one area which is the first half. The majority of the goals were scored by the Mariners in the second half. They won 12 matches out of 21 this season and lost just 4 matches. Sandesh Jhingan might be unavailable as he limped out of the final league-stage game against Mumbai. The skipper also missed out the first leg of the semifinal but he may find the place in the lineup tonight. Carl McHugh will make his place in the backline.

Meanwhile, Northeast are confident and made into the playoffs for the second time. At midway of the season, they sacked their head coach Gerard Nus, and since this incident, they have been a better side. Highlanders defeated Kerala 2-0 to book their place in the semifinal. In the first leg semifinal, they were on the verge of losing the game but Sylla came out as a survivor. Highlanders are unbeaten from the last eleven matches, and they have defeated Mariners last month, courtesy of Machado and Gallego’s strike. Highlanders are the side that defeated the shield winner and the finalists of this season twice in the tournament.

Out of seven matches against the three best sides of the season (Goa, Mumbai & Mohun B.), Northeast lost just one game which is remarkable. Both sides had one win each from three meetings so far, but if we calculate the aggregate number, then Mariners had a laugh with 3-2. Both sides would look for a better finish because if the game enters in the penalty-shootout then it will surely hurt any team. Goa missed out the final for the successive season last night in the second leg semifinal against Mumbai. If Northeast managed to take control of the game in the first half and enters the second half with a lead, they might haunt Mariners.