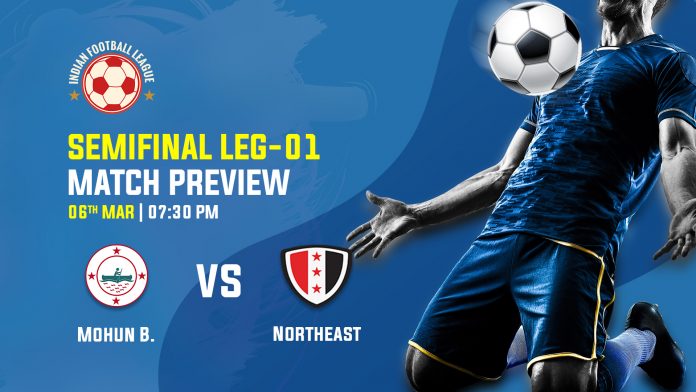 Northeast and Mohun B. will meet in the leg-01 of the second semifinal. Mariners finished second in the table, while Highlanders finished third.

Northeast and Mariners will lock horns in the first leg semifinal of Indian Football League 2020-21. Habas’ men had the best chance to clinch the top spot in the table, but they suffered a 2-0 defeat to Mumbai and lost the AFC Champions League qualification. Mourtada Fall scored the opening goal for Mumbai in the 7th minute through Ahmed Jahouh’s free-kick. Sandesh Jhingan was subbed in the 19th minute due to an injury, but the Mariners came close to strike. Marcelinho’s free-kick was blocked, and David Williams’ corner cleared easily. Just before the cooling break, Jahouh delivered a long ball for Pranjal, but he struck the ball just over the post. Mumbai scored another in the 37th minute through  Bartholomew Ogbeche.

The Kolkata giants fought hard, and they created chances in the final third. Mumbai were the top favourites from the first game of the season, and the Mariners got chances due to a slight downfall in Mumbai’s performance. Lobero’s side played with full potential. Antonio Habas would look for the main title, and they have to overcome the big task of Highlanders. Mariners conceded the least goal in 2020-21 with 15. They have to improve their first-half issue. Habas’ men dominated the second half throughout the season but lacked in the first half. Their majority of the goals came in the second half. They won 12 matches out of 20 and lost just 4 matches.

Meanwhile, Northeast are confident and made into the playoffs for the second time. At midway of the season, they sacked their head coach Gerard Nus, and since this incident, they have been a better side. Highlanders defeated Kerala 2-0 to book their place in the semifinal. Northeast assured their place in the top four after the first half. In the 34th minute, Suhair Vadakkepeedika had a good run and took the ball from the defender to provide a lead for Northeast. Khalid Jamil’s side doubled the lead in stoppage time through Lalengmawia’s stunning goal.

Northeast are unbeaten from the last ten matches, and they have recently defeated Mariners, courtesy of Machado and Gallego’s strike. Highlanders are the side that defeated the shield winner of this season twice in the tournament. Out of six matches against the three best sides of the season (Goa, Mumbai & Mohun B.), Northeast lost just one game which is remarkable. Both sides had one win each from two meetings, but if we calculate the aggregate number, then Habas’ men had a laugh with 3-2.