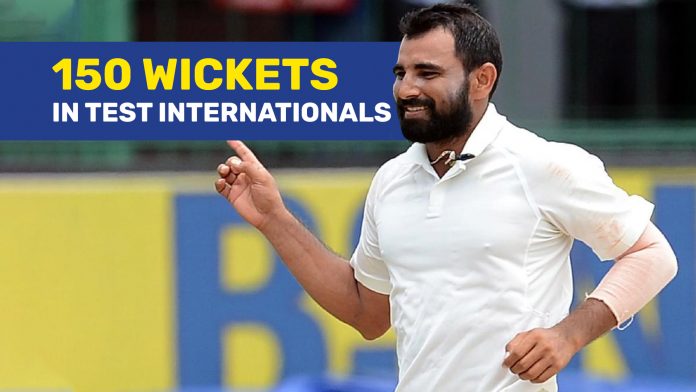 West Indies team performance in the ongoing MyTeam11 series has been woeful as the team hasn’t registered a victory in the series till now and in the second test match going on at Sabina Park, only a miracle can take the host to victory. In this Test match, Indian right-arm medium pacer Mohammad Shami picked up his 150th wicket of Test International career after dismissing ‘the big man’ Rahkeem Cornwall on a bouncer.

With this wicket, 28-year old pacer, Shami became the third-fastest Indian fast bowler to achieve that milestone. He accomplished this feat in just 42 Tests, surpassing the great Zaheer Khan and his current teammate Ishant Sharma. Only Kapil Dev and Javagal Srinath are ahead of Mohammad Shami. Legendary Kapil Dev reached that mark in just 39 matches while Javagal Srinath took 40 games to get 150 wickets.

The Ongoing Test series between West Indies and India has been gorgeous for Mohammad Shami. He looked aggressive in both the Test matches. In the First Test match played at Antigua, Shami picked up four wickets in two innings while in the first innings of the second Test match, the right-arm speedster showed two Windies batsman the pavilion way.

Earlier, with the bat Team India posted a mammoth total of 416 runs in their first innings, thanks to brilliant century by Hanuma Vihari (111 runs off 225 balls).