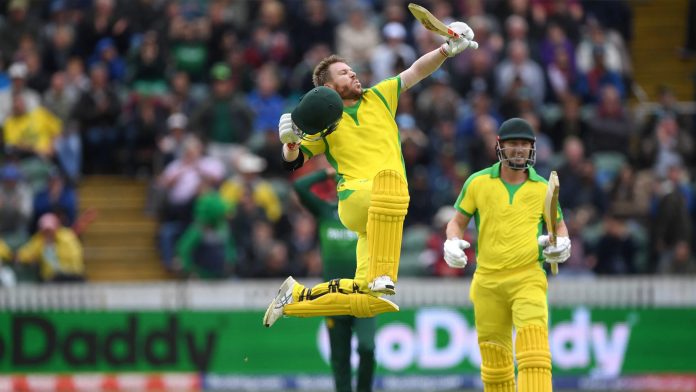 After defeating Pakistan in a bilateral series previously this year, once again the Aussies looked in great touch to continue their winning streak against Pakistani. David Warner, who played slow innings against India in the last match, once again didn’t look destructive in the initial overs of the innings in the match. But, as the time progressed, the left-hander found it easy to strike the ball. Hence, reaching his first international hundred after serving a year ban for ball tampering.

Pakistan skipper Sarfaraz Ahmed won the toss and opted to bowl first on a pitch that is considered to be batting friendly. His decision backfired as the first wicket partnership between Australian skipper, Aaron Finch, and David Warner lasted for a long time. Both of them added 146 runs in 22 overs before left-handed pacer, Mohammad Amir gave the team their first breakthrough in the form of Aaron Finch.

At this moment, the Australian team was looking set to put above 350 runs on the board, but an outstanding spell by Mohammad Amir stopped them at 307 runs. The left-handed Pakistani speed gun conceded only 30 runs and took five wickets in his spell. Apart from Warner’s ton and Aaron Finch ‘s 82 runs knock, no other Kangaroo batsman crossed the 30 runs mark.

In response to the chase, Pakistan lost two wickets at the score of 56 runs in 11 overs. Imam-ul-Haq and Mohammad Hafeez provided some stability to the innings after the destruction before Pat Cummins dismissed the opener, Imam-ul-Haq as soon as he crossed his half-century mark. After this, Pakistan lost three quick wickets for just only 24 runs hence 136/3 score became 160/6. Following this collapse in the middle of the innings, skipper Sarfaraz Khan, and left-handed pacer Wahab Riaz showcased reasonable efforts to take the team to victory but at the end Australian bowlers’ incisive bowling ended the Pakistan innings at 266 runs with four overs left.

David Warner was named the ‘Player of the match’ for his prolific batting performance (107 runs off 111 balls).