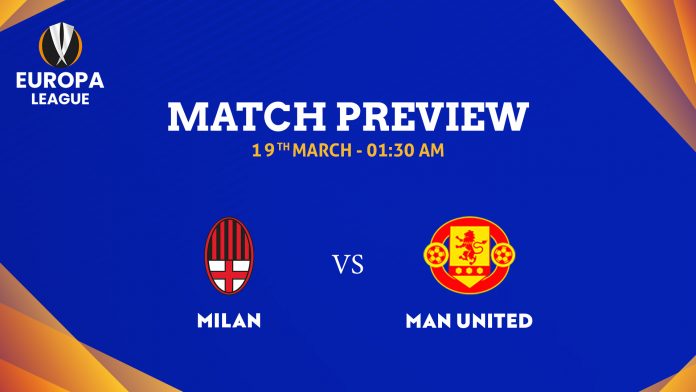 Man United and Milan lock horns in the second leg clash of the Europa League round-of-16. Both sides played a 1-1 draw at Old Trafford last week.

Man United makes travel to San Siro for the second-leg clash against Milan tonight. Amad Diallo's maiden goal was canceled out by Simon Kjaer's late equaliser and it offered Milan to spoil United’s party in European competition. They already have one away goal which can boost their preparation ahead of the second-leg game.

Things are not ideal for Milan as they have lost their grip on the title of Serie A and their arch-rivals Inter Milan are now nine points ahead at the top spot. They are coming off a 1-0 loss to Napoli which hurt their chances for the title glory. Milan’s struggle in the last couple of games shows with this number as they won only two games from their last nine in all competitions. Milan almost lost the first-leg game in Old Trafford but they earned a crucial away goal two minutes into injury time, courtesy of Kjaer’s direct header.

Meanwhile, Man United are on the same table when it comes to domestic top-flight. Ole Gunnar Solskjaer’s side defeated Man City to end their rivals’ long winning streak but it wasn’t enough to see themselves sitting at the second spot. Harry Maguire missed an easy goal from less than a yard and it proved costly in the end. The margin of 2-1 could have been a better picture. Man United have to find a better strategy to extend their hopes for the first trophy of the season.

The Red Devils are entering into this fixture with a 1-0 success against West Ham in Premier League, thanks to an own goal from Craig Dawson. They kept the fifth clean sheet in six matches and extended their unbeaten streak to 13 matches across all competitions. The English outfit have scored in all of their 13 Europa League knockout away games.

Milan's key player and top goal-scorer Ibrahimovic recently recovered from a thigh problem and he also got a recall from his national side so he will miss out this fixture. Hakan Calhanoglu and Theo Hernandez will be back in action for the hosts. Ante Rebic will now serve the two-match ban and he will be the latest absentee. As for United, three players are in doubt to available for this match as Cavani, Paul Pogba, and Donny van de Beek, are not sure for this match. Anthony Martial may find his name on the lineups after missing out the previous game against West Ham.