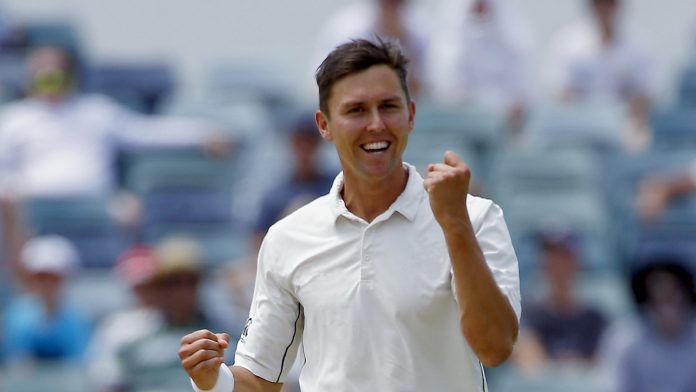 The New Zealand pacer, Trent Boult gets his name engraved in a golden letter in the history of cricket on day two of the Second Test between Sri Lanka and New Zealand. The player left the entire team, audience and the cricket world stunned after he picked six wickets in just 15 deliveries for just 4 runs.

The pitch at Christchurch played a crucial role as it acted as an aid to reverse swing, allowing the player to create havoc on the field. The game started with the Islanders resuming their innings at 88 for 4 and the crease being handled by Roshen Silva and Angelo Mathews. The game went well for the Lankan Lions till the score of 94, which they achieved without any difficulty.

However, things took a turn when Boult took hold of the ball and made it difficult of the Sri Lankan players to settle down on the crease, resulting in a rapid downfall of wickets for the visitors. The show started with Boult dismissing Roshen Silva and then bagging 6 wickets, one after the other, in a total of 15 deliveries, to bundle the visitors for a total score of 104.

The dismissal showdown which began with Silva packing bags to make his way back to the pavilion saw wicket-keeper batsman Niroshan Dickwella being the next. Dilruwan Perera, Suranga Lakmal, Dushmantha Chameera, and Lahiru Kumara were the other four players to follow the trend, who all were dismissed for a duck by Trent.

The game turned out to be an interesting tale of stunning events. Trent with his alluring record helped the Kiwis attain a 74-run first innings lead in the game.

We eagerly wait to see what all unexpected events can be seen in the upcoming game when the Kiwis & the Islanders will once again take to the field to face each other. To stay updated with the latest sports stuff stay connected with MyTeam11.