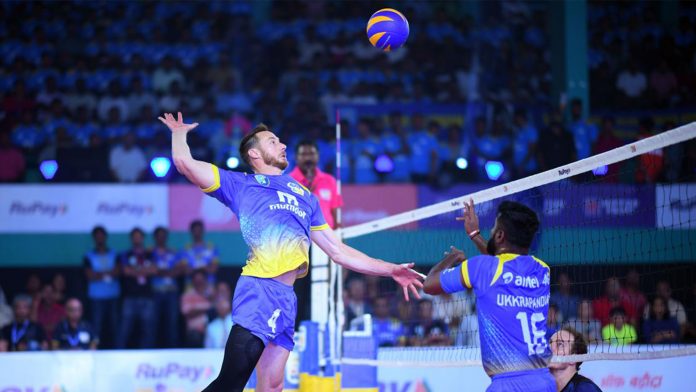 Black Hawks Hyderabad were expected to hop back in the game with super-high levels of excitement and preparation after their defeat against Chennai Spartans on Thursday. However, all the hopes went in vain as the fans saw Black Hawks recording another loss on Friday against the Kochi Blue Spikers.

The five sets of the game saw a lot of up and downs wherein both the teams were playing very cautiously, to register the victory title under their name. With each step kept carefully, Hyderabad managed to take a lead of 8-7 in the First set before the first Technical Time Out (TTO). The first set was wrapped up by Hyderabad with a lead of 3 points at 15-12.

However, the next three sets were consecutively in favor of Kochi Blue Spikers as they managed to haul a lead of 4, 3 and 5 points at 15-11, 15-12, and 15-10, in the next three sets, respectively. However, despite losing the game, Hyderabad didn’t give up on their game and went on to win the last set by a score of 15-14.

The next match of the RuPay Pro Volleyball league will be played on Saturday, i.e., 09th February 2019 at Rajiv Gandhi Indoor Stadium between Kochi Blue Spikers and Calicut Heroes.

Share
Facebook
Twitter
Previous articleIPL 2019 : 3 OVERSEAS PLAYERS TO LOOK OUT FOR
Next articleCalicut Heroes Qualify for the Playoffs as they see off Hyderabad 3-2 on Day 9 of Rupay Pro Volleyball League